Yeah! Another lovely, poety week with plenty of laughs.

Sean Morley fresh from his highly successful Edinburgh run.
Lee Pollard is a performance poet who has recently taken an enforced absence from reciting poems after badly burning the inside of his right ear with the filling from a steak and kidney pie.
Sile Sibanda is passionate about entertaining and bringing joy to people through performance and recently won BBC Radio Sheffield’s This Is Me competition.
Valerie Monti Holland has built a career using creative techniques in prisons, schools and organizations across the public, private and voluntary sectors to deliver workshops and training.

And the fun didn't end there, me and my girls went to The Venue in Birdwell to see Martin Kemp DJ an 80s night. I have to confess I couldn't stand the pace, and had to abandon the disco/rave/gathering, call it what you will, in favour of my comfy armchair and a quiet cup of tea. Still it was so good to see my family all together. 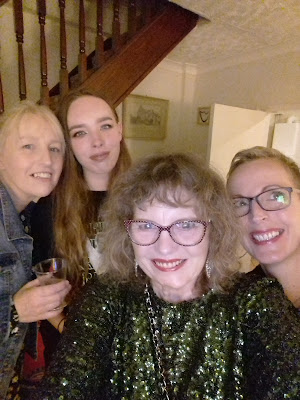 And today, David and I had a stroll across the park to Hoyland and back. We didn't linger to watch the football, but it was good to see a group of young men running up and down the field, you know, testosterone and all that.

And the purpose of our trip to Hoyland, was to visit the Tap and Brew to arrange a date in October, for my book launch and a spoken word afternoon. Well, the landlady was not there so no date fixed today, but watch this space.

So, I thought you may like to hear the impromptu story which I related to a lovely audience at the Shakespeares pub in Sheffield last Thursday evening, subject, Mishap!

The Donkey Is Dead

It all began with one of those crazy ideas. When we lived in Crete we bought an olive grove, and I, in my weirdly, wacky wisdom, thought it might be nice to have a donkey. Well, it wasn't long before an old farmer let it be known that he had a donkey he would give me. It was in a pitiful condition, hooves that were as long as Aladin's pointy slippers, making it very difficult for the old beast to walk, and a mangy coat that was full of ticks. We did try to give our Rosie a pain-free couple of months before she died, but die she did.
Unfortunately I was in England at the time due to a family crisis, and David had to look after our dying donkey.

Knowing her end was nigh, he took her to our olive grove. The next day she was no more, so he (with the help of a mate) dug a very big hole on our land, slid Rosie into her grave, and covered her over. Unfortunately, someone seeing the grave, and me being off the scene at the time, put two and two together and the rumour went out that David had done away with me and buried me, on the land. It could have been a sticky situation had I not returned in the next few days. R.I.P. Rosie.

I'd be telling porkies if I said I wasn't interested in Brexit and Climate Change, but you know what, there isn't a blind fig I can do about either one, so I have resigned to becoming a passive observer of events. There are all sorts of arguments, for and against Brexit, and the politicians don't seem to be able to agree on one specific outcome, and that isn't just British politicians, the European lot haven't exactly been too helpful as far as I can see. I do find it all very interesting though, if not a bit tedious after three years of trying to exit the European Union. As for Climate Change, my personal carbon footprint, with not having a car, not having flown anywhere for two years, not eating meat, and buying most of my clothes at the charity shop, is quite minuscule.

I think I will make a cake tomorrow, and probably get my arms around Valentino, as for tonight, I'm not a Peaky Blinder's fan so I will just have to settle for The World's Most Expensive Cruise Ships. I like watching the lives of the rich and the slightly insane.