To celebrate National Poetry Day we decided to take a day trip to Marsden. Why Marsden? Well it is the village where Simon Armitage was born and brought up, they do seem to be promoting poetry in the pubs and shops, and it's a little place in Yorkshire that we had never been.

We found Marsden, on a beautiful autumn Thursday, to be a sleep hollow. There were a few hill walkers passing through, locals walking dogs, the occasional cyclist, but the best buzz by far was in the Riverhead Tap where we settled for lunch and a pint. 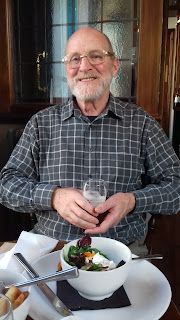 After lunch we took to the streets to search for poems which had been displayed in the shop windows. 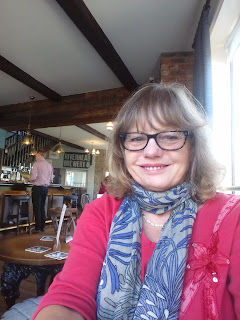 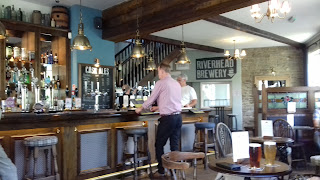 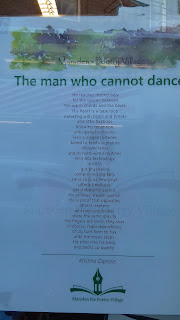 This is just one of the many poems we found 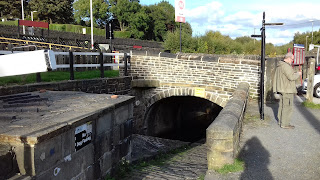 Railway and canal run side by side at this point. 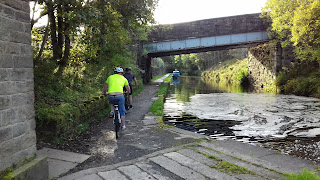 We took the tow path walk (15min each way) to the entrance to the Standedge Tunnel. 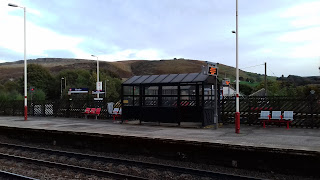 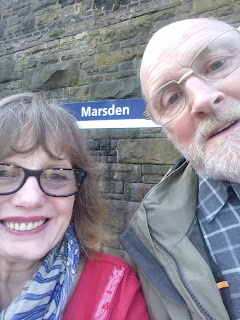 Later the muse did descend. Here is my poem set out a la Marsden shop window poetry.

FROM ASTEROID TO ARMITAGE

In year dot, well before dinosaurs
When the earth was not much more than a fluid snowflake
And protozoa had to cling to pondweed
And baffled molluscs lived and died without knowing why,
An orbiting satellite, an un-mined asteroid
solid as a diamond brick, black as anthracite,
The size of the Great Pyramid of Giza,
Mystifyingly shucked off its course
And began to hurtle through the firmament
In the general direction of down.
Down, down, down it fell
Blazing through the heavens
Down down down, casting a momentary shadow,
before blinding the icy soup,
Down down down, with a blasting punch
That ripped into unseen sphagnum,
Blitzed spirogyra, and annihilated all the, who knows what,
sensory inhabitants of moss, that might have clocked its brilliance.
It fell like God-plop onto a slop of earth,
In a rise of steam, in a hiss of vapor, in a press
Of unheard sound, that wouldn't have been out of place
in Bank Bottom Mill. Death interrupted life.
And a great hole smashed through the liquid slush,
and blasted into smithereens smaller than protons.
And it was gone, a flash, a explosion, then nothing.
A chip off a planet’s block,
Or so the legend goes, that made a dint where otherwise
There might have been a mountain.
Eons later, eons and eons later, the locals called that place
Den o’ t’ Mars, knowing that the lay of their land had been
Moulded by some extraterrestrial collision.
Marsden to you and me.
They passed on the secret down the generations,
Druids whispered it to trees,
Poets came.

There you have it. Where shall we go to next? I have a hankering to go to Holmfirth, I did spend the morning with poet friends at Sheffield Library on Saturday. It is so good to mingle now and then. David and I went to the Civic Theatre in Barnsley last night. It was what they call a Scratch night. Basically would be drama buffs trying out their abstract work on a freebie audience. We did have a laugh, pity the chip shop was closed when we came out, a bag of chips would have been the highlight of the evening. We ended up getting one packet of crisps out of the vending machine at the bus station, and sharing that, it didn't quite top the bill.

So, till next time dear reader, I hope you are well and have more exciting things to do than eat a packet of crisps. Happy days!
Love and hugs,
Jane x