Death on The Happy Train 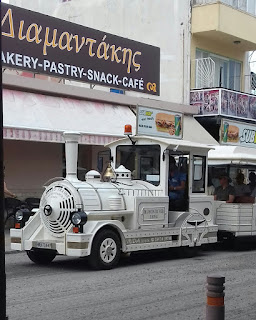 The weather over the past few days has been a bit grim to say the least but today the sun is shining and I would imagine the beach is full. Ah, mad Malia, sun, sea, and celibacy - well for some. Nobody every says celibacy do they, but for old timers sitting in Galaxy Bar in the middle of Malia, it has come to this, spending the afternoon watching young, scantily clad, nimphets pass by on their way to the beach.

A couple of days ago we walked down the mountain from Vrahassi to Neapolis and from there caught a bus to Malia. The day was inclement so we did our shopping and took the bus back to the Vrahassi Tunnel then legged it back up the mountain.

This is what I wrote when I got home. (Obviously not in a serious mood)

Death on the Happy Train

But wait, here comes the driver, give us a toot Happy Train driver. ‘Eugh?’

The soft perspex windows are down, looking like shower curtains from Bates’ Hotel, or the cover you throw over your garden table in the winter. The train has got its hat on – hip, hip, hip, hooray!

Carriages are full of people who don’t want to sit on the beach freezing their bollocks off under a cloudy sky, when you’re wet you’re wet or not. They are the sort of people who wear socks with their sandals, the sort who still read newspapers at breakfast time, carry their own cushion everywhere, and eat egg sandwiches. And in between, squashed on a bench with his doting grandparents, a 13 year old boy stares into his lonely flies, for want of a computer screen. ‘This is fun,’ says Grandma nudging him. He’s about as interested as a train spotter at a bus convention. She nudges him again, ‘Come on, you might enjoy it.’

Behind them there’s a Burger-mister from Germany. He takes up a whole bench ‘cos he’s probably so full of shisenhausen burgers. His tiny wife has to sit behind him. There’s a hint of lederhosen under his Bergerhause, non-iron, walking trousers. Around his neck, sitting on the ledge of his stomach, is a zoom lensed Pentax ready for those long distance wild game shots, probably of the nudist beach. The tent-flap plastic impairing his vision must frustrate him; then again it probably excites him. She is blond.

In the first carriage, two carriages in front of the boy with no I-pad, and no idea, there’s a young couple. They’re probably on honeymoon and don’t know what to do. Don’t they know they should be right at this moment, humping the bed springs out of the mattress, covering each other in trifle, or other some such sloppy cream, at least a dollop of Greek yoghurt, and singing Yo Ho and Up She Rises? What on earth are they doing on the Happy Train? Oh…

Nobody sees the dead man on the back seat. He’s probably died of boredom, poor old bugger, waiting for the thrill of a lifetime.

And if I don’t get a move on I might go the same way, there’s only so much lazing about you can do. And by the way, the above piece is totally fictitious; though it was freeze your dooda’s off weather in Malia the other day. Not so today, and I'm sure for the rest of the summer.

And if you are reading this, Jackie from the little bar in Malia where the bus stops for Agios Nikolaos, thank you for your kind words, and the lovely cup of tea. Hope to see you again soon.

And no I'm not drunk, just happy!