2 Day Break in York at the Parsonage Hotel and Spa

Well, I don't think I have ever left such a gap before writing my blog. The truth is, I relaxed so much over Christmas and the New Year holiday, that I sank into very lazy ways. I ate too much, drank too much, and did a lot of a little, too much.

It had to stop. The purge had to come.

After almost a month of no booze, very little meat, and absolutely no cakes, I have lost the weight that I gained, and feel much better. Especially after a wonderful two day break at a luxury hotel near York, with my friend, Pauline. It was a true adventure, worthy of documentation. 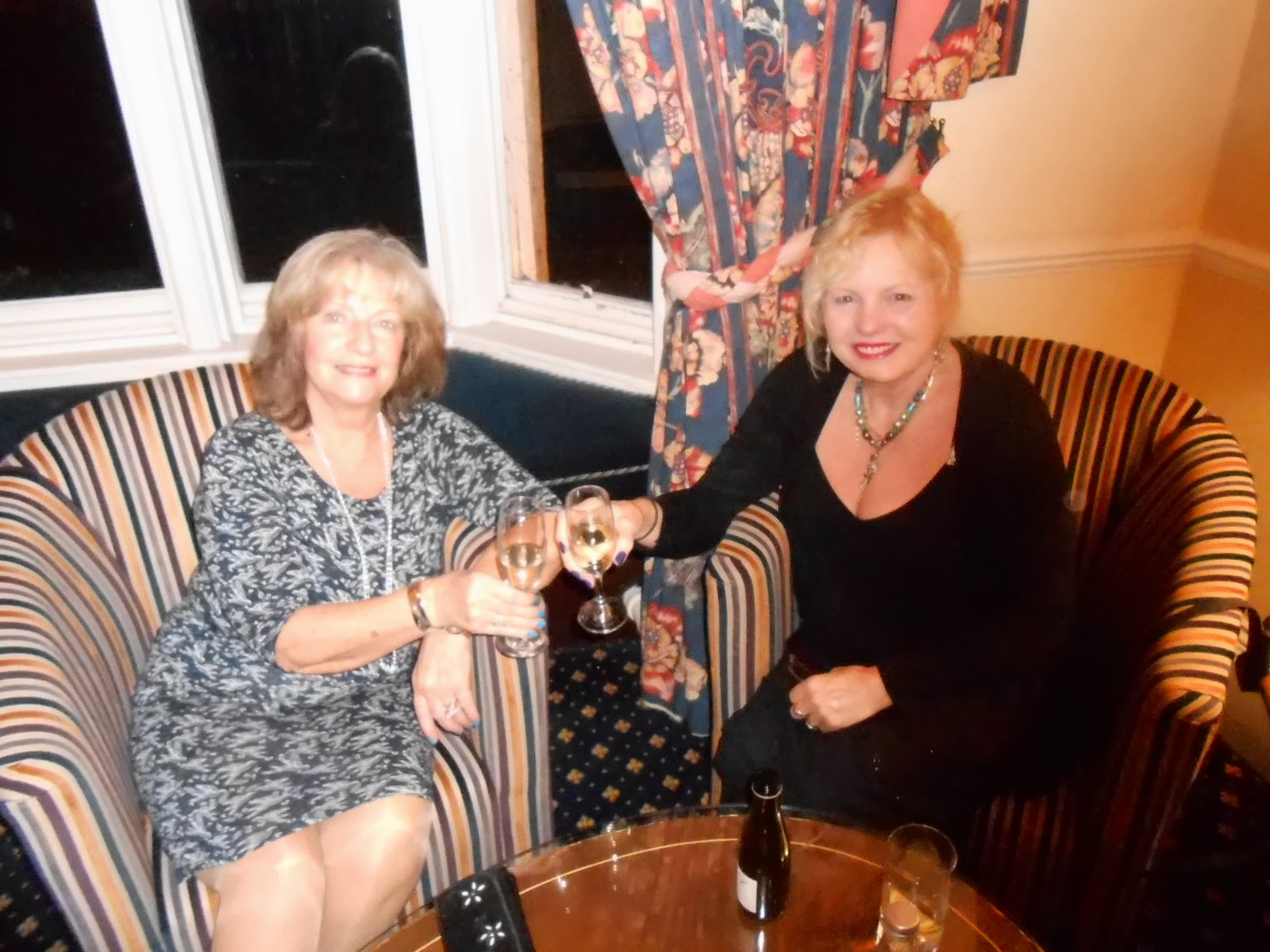 We met up at the railway station in the middle of York, Pauline having travelled from Middlesbrough, and and me from London. Both our trains were on time, and we both had a trouble free journey. In fact, my journey was extra delightful because sitting opposite me was a most charming young man, Roger, a genetic engineer, from Berwick.
Anyway, we caught a bus from York to the Parsonage Hotel and Spa at Escrick, approximately 15 minutes out of town. As soon as we arrived, we hit the spa, where we swam in a lovely heated pool, spent time in the jacuzzi, steam room, aromatherapy room and salt room. And, after working up an appetite, we snuggled into bath robes (courtesy of the spa) and enjoyed afternoon tea in the lounge.
Dinner that night was excellent, and we were so full that we went straight to our room afterwards, and slept extremely well. 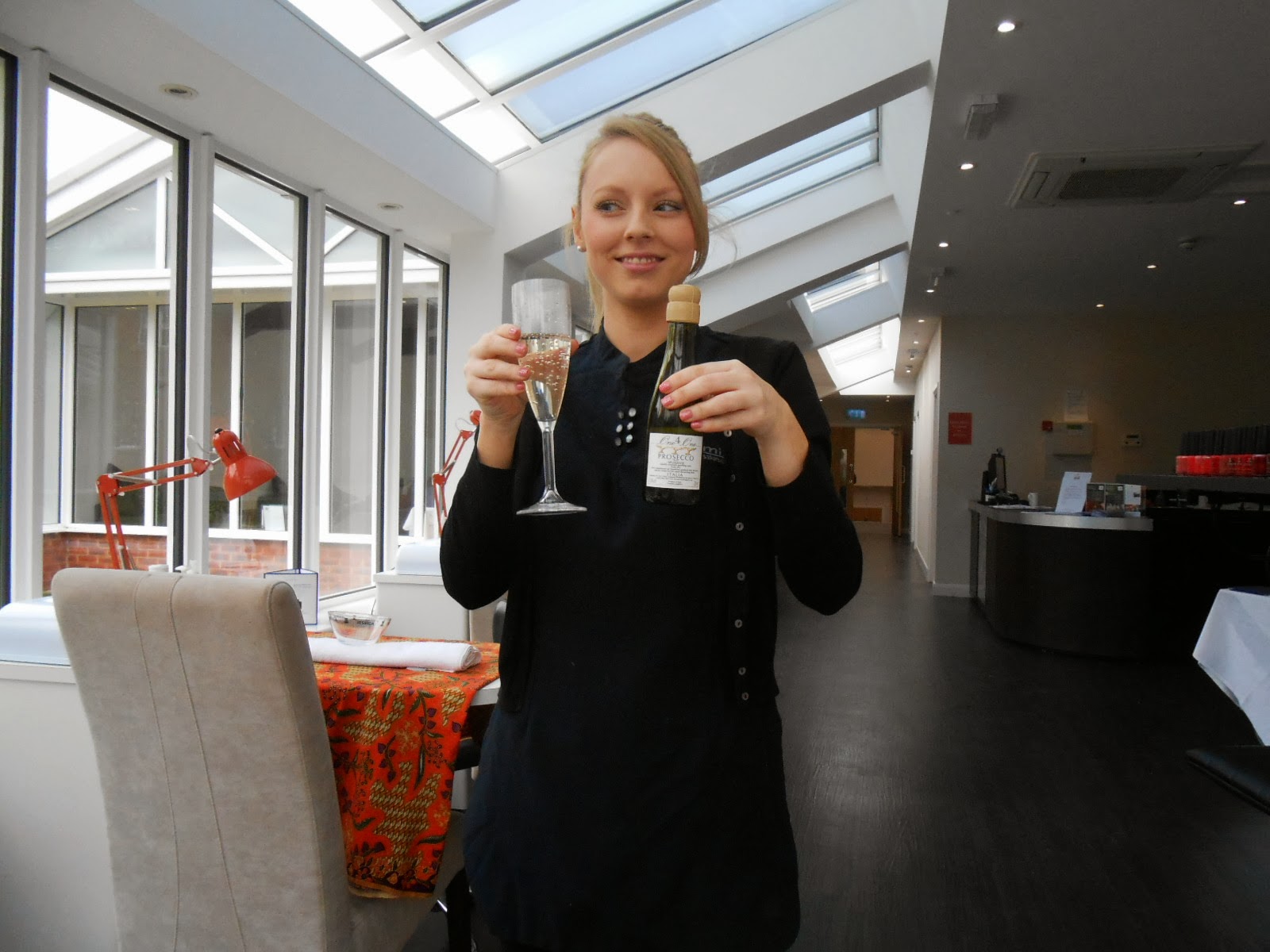 Next day, refreshed, (but always up for a little more refreshment) we went to the spa again, where we both indulged in a lovely pedicure. There, Garry, Fay and Natalie looked after us very well, 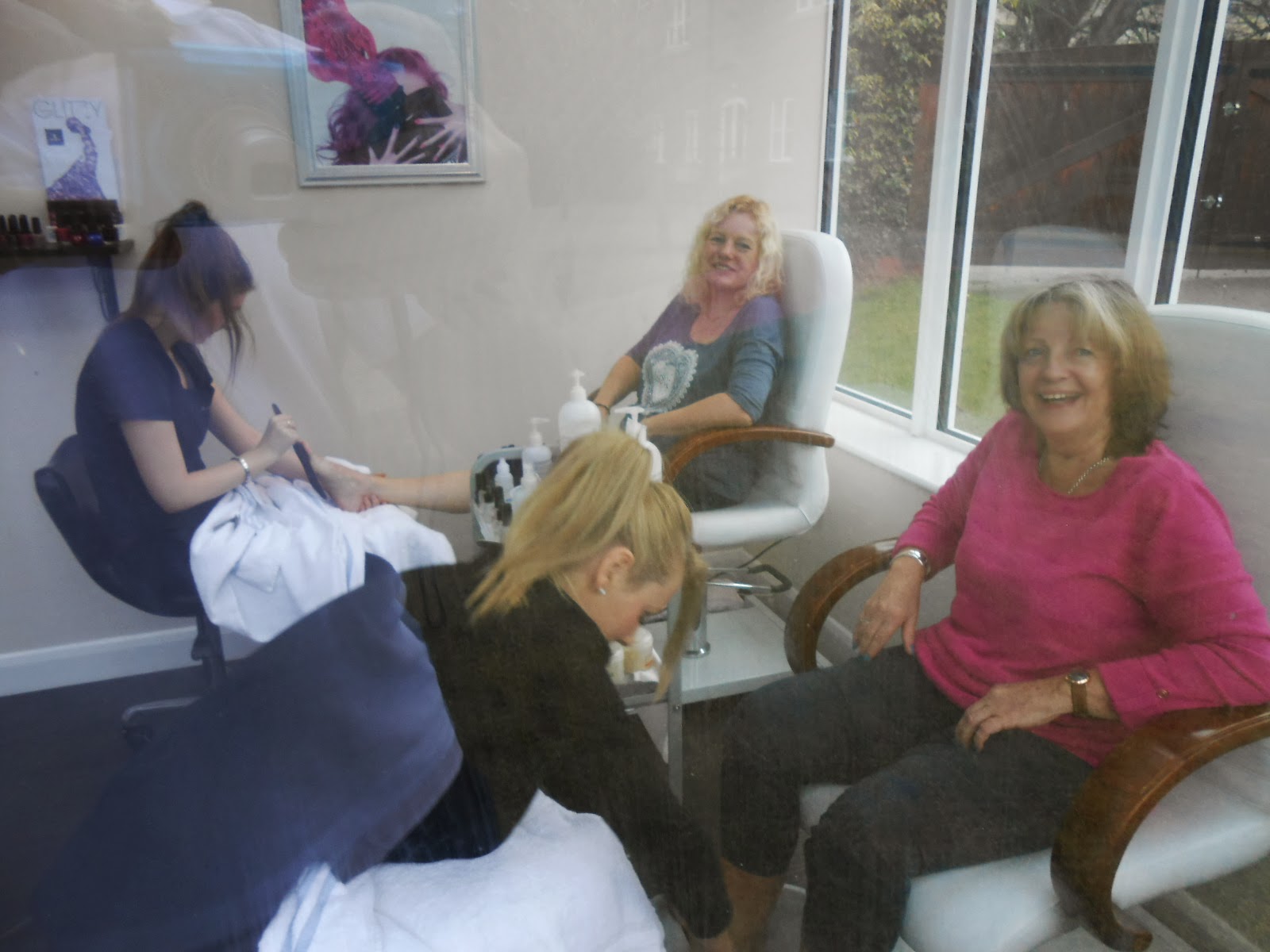 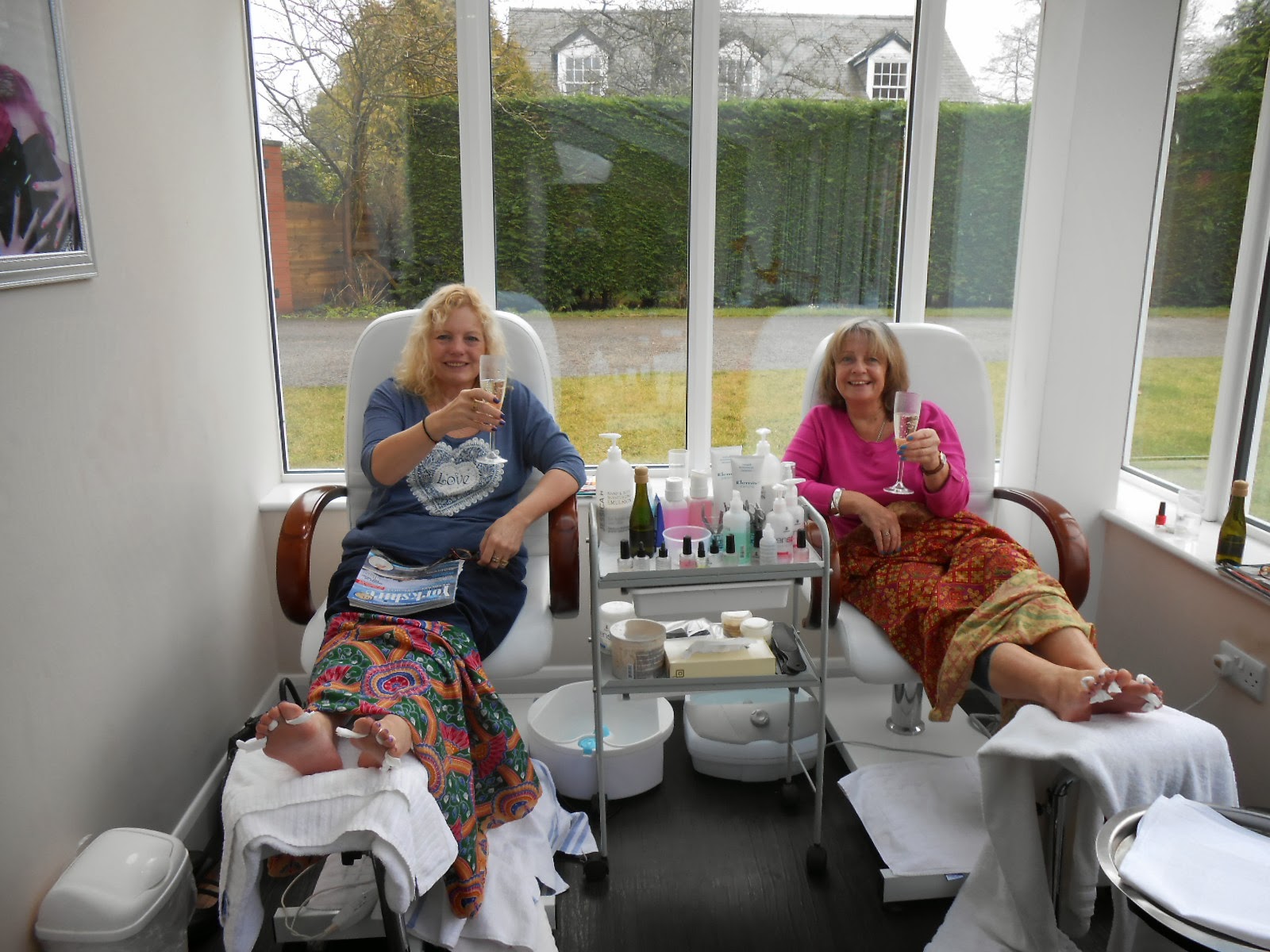 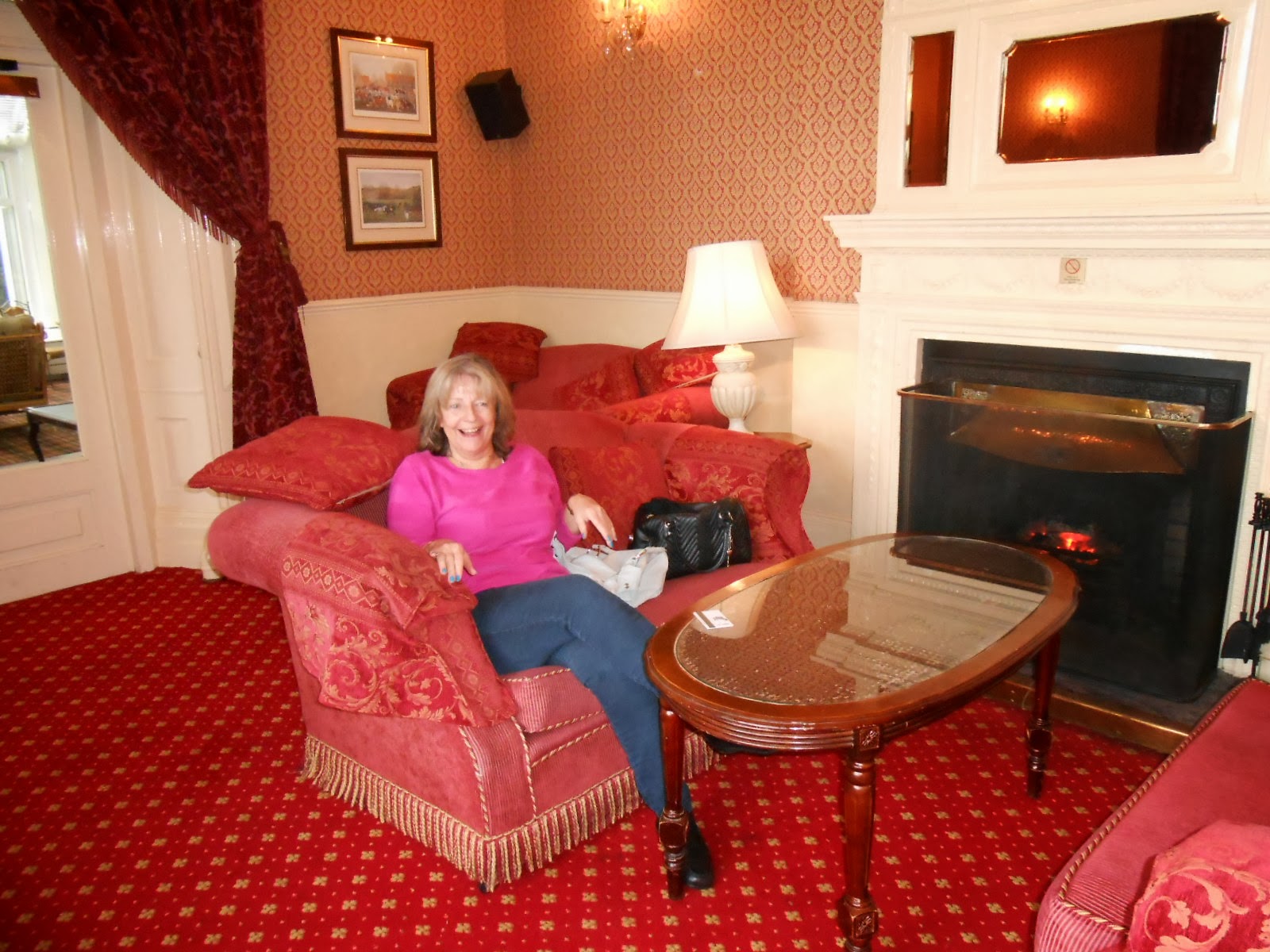 We were tempted to stay at the hotel all day, it was such a relaxing place to be. 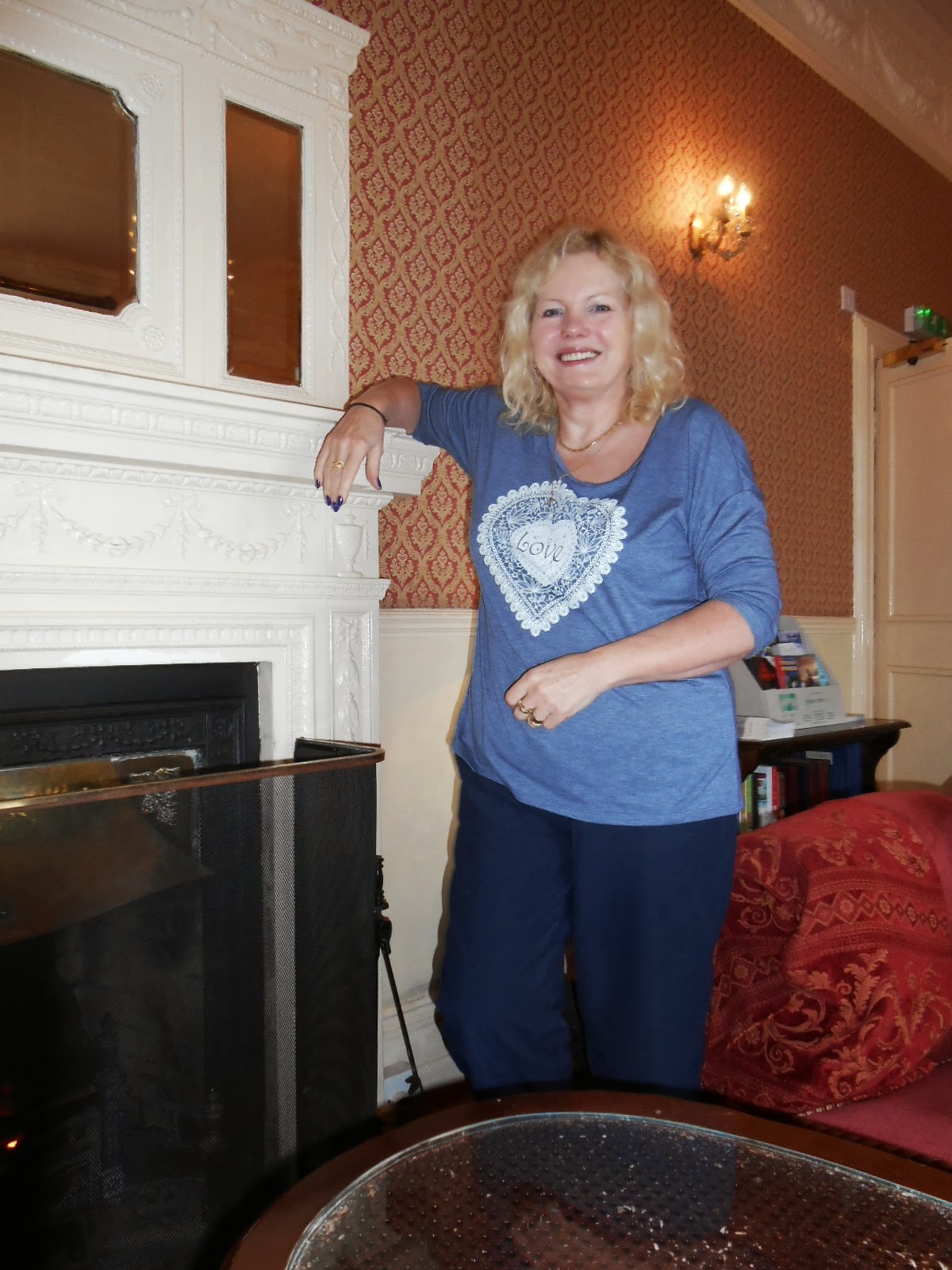 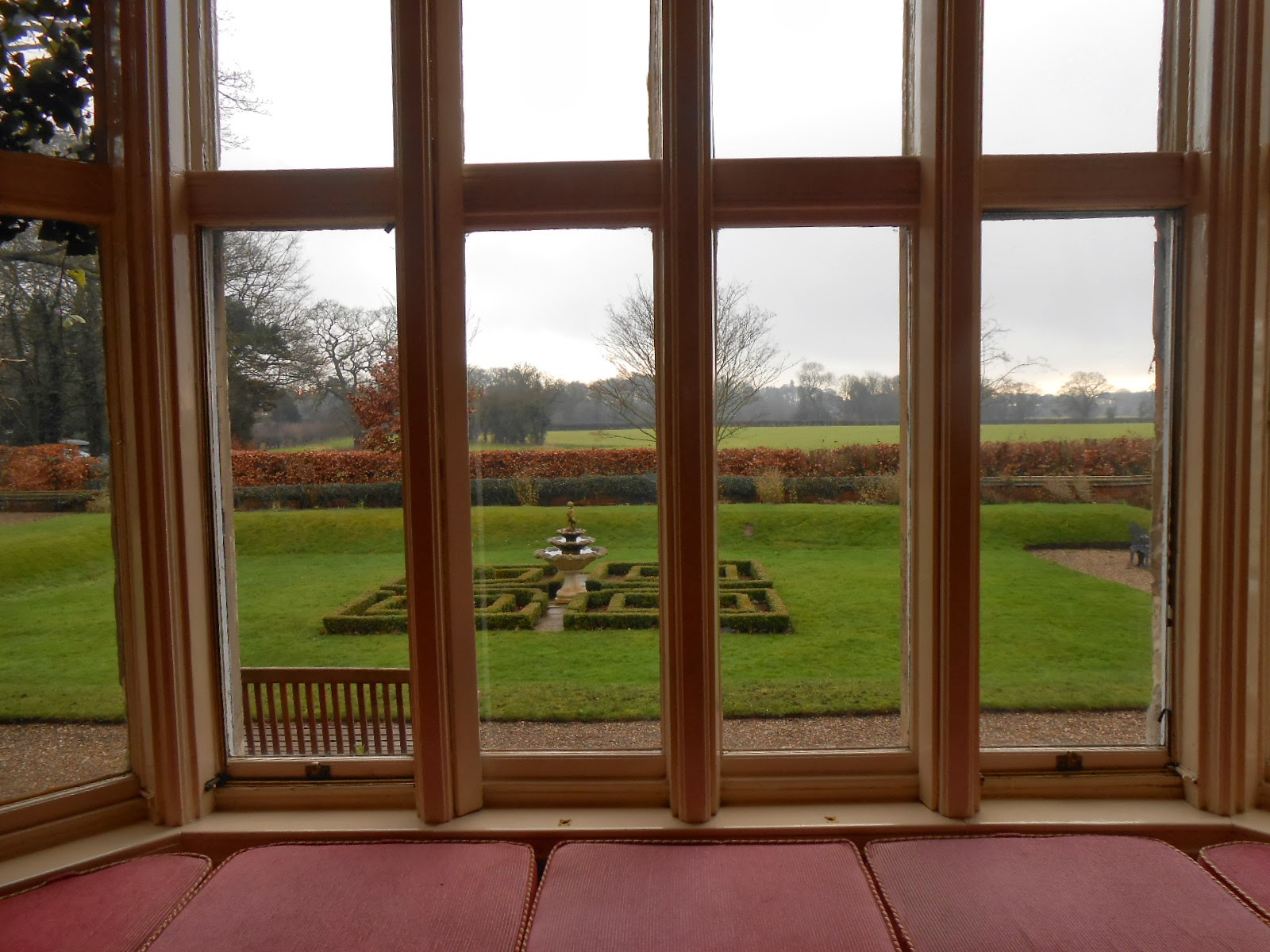 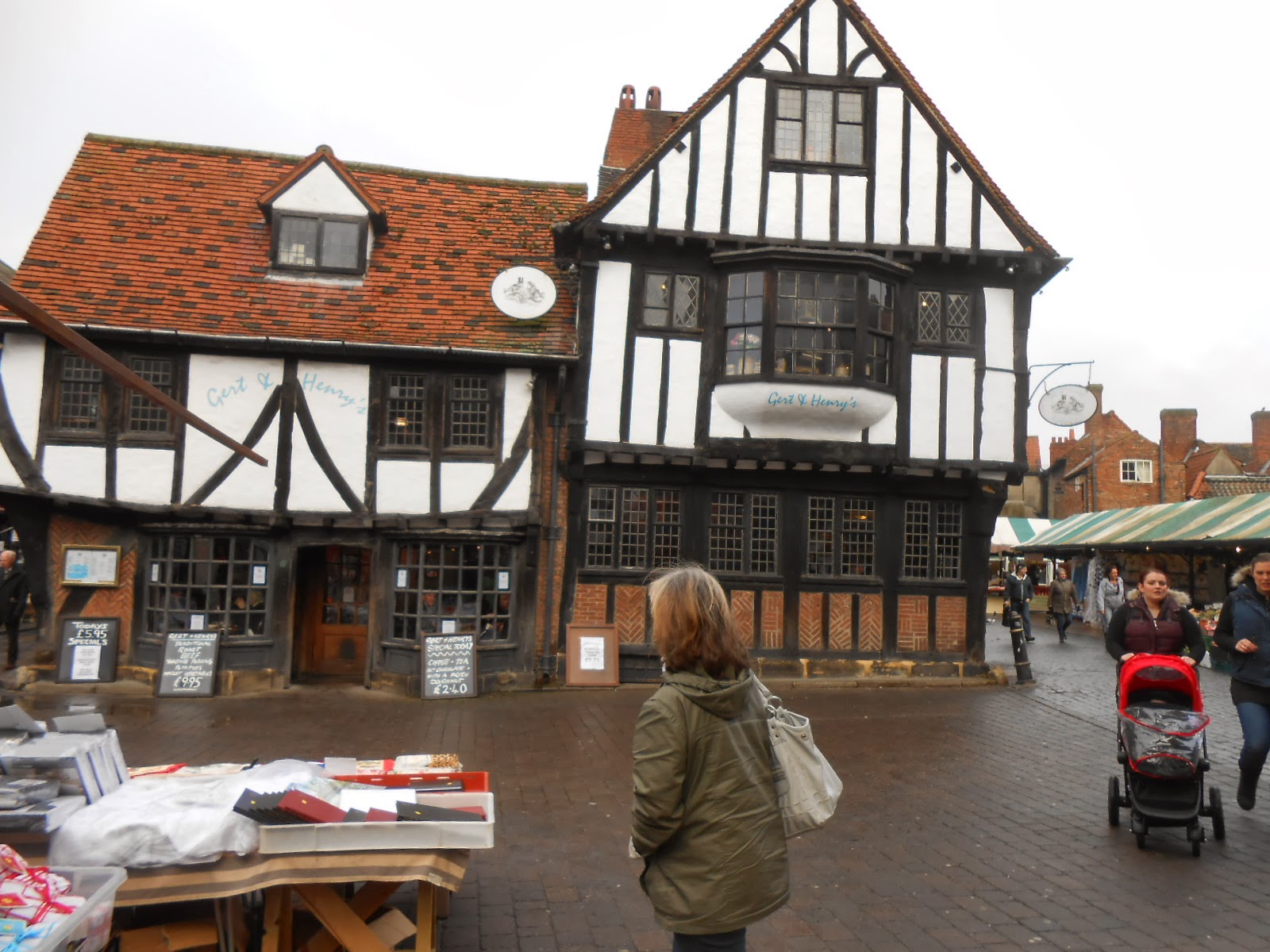 But we finally made it back into York, and headed for the Shambles and a spot of shopping. 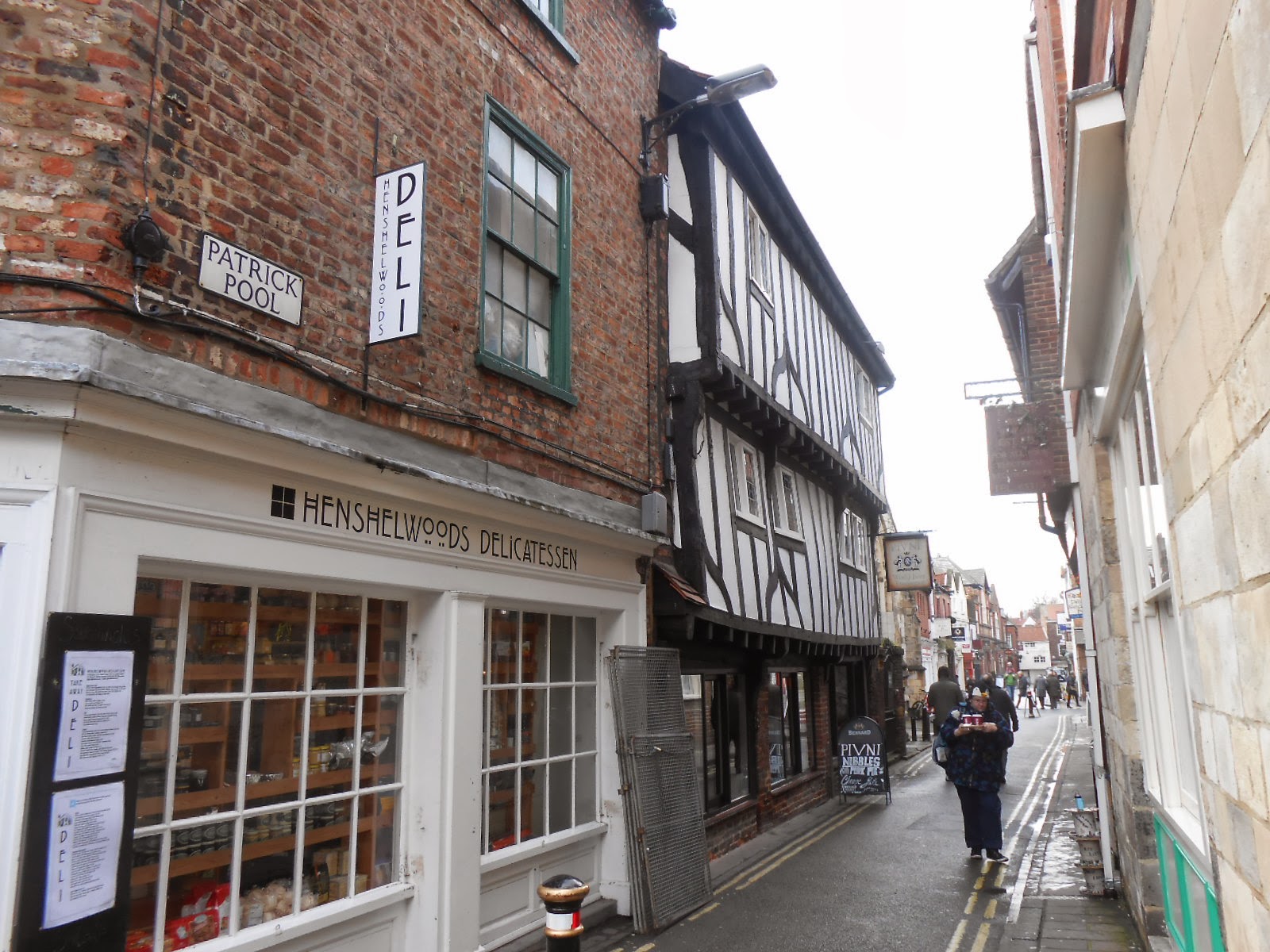 I just love York with its narrow streets and quaint little shops. 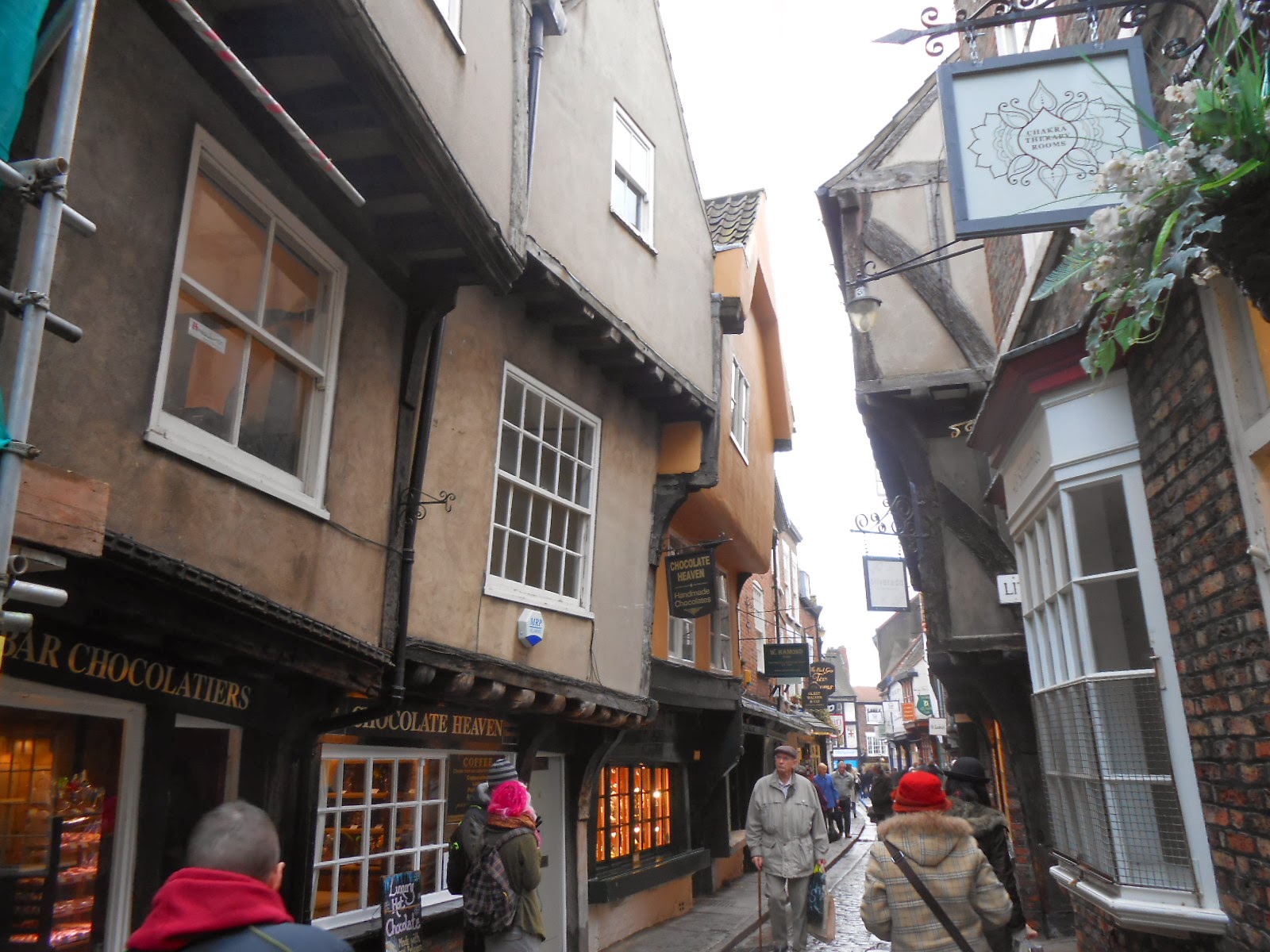 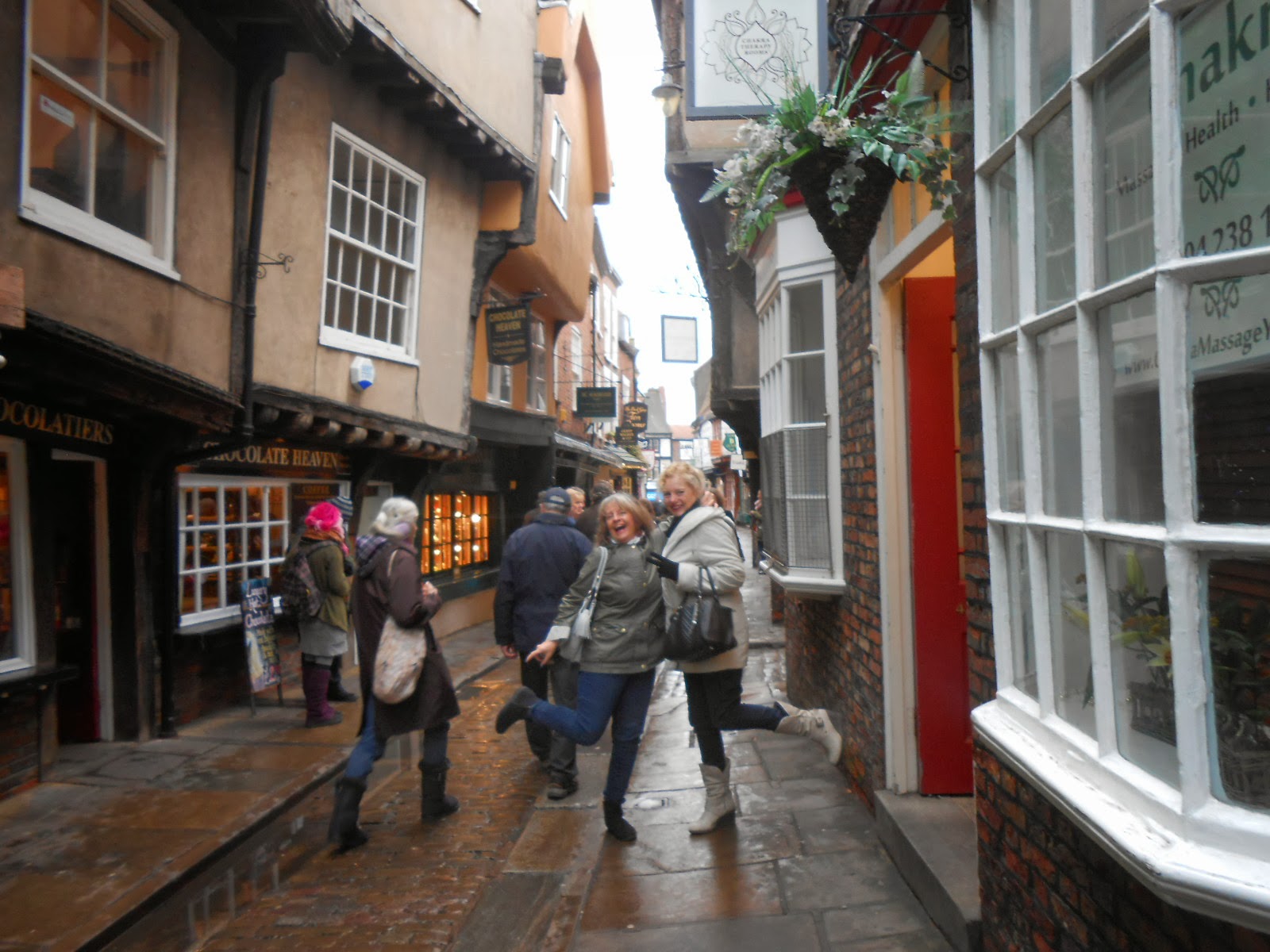 We were definitely girls about town. 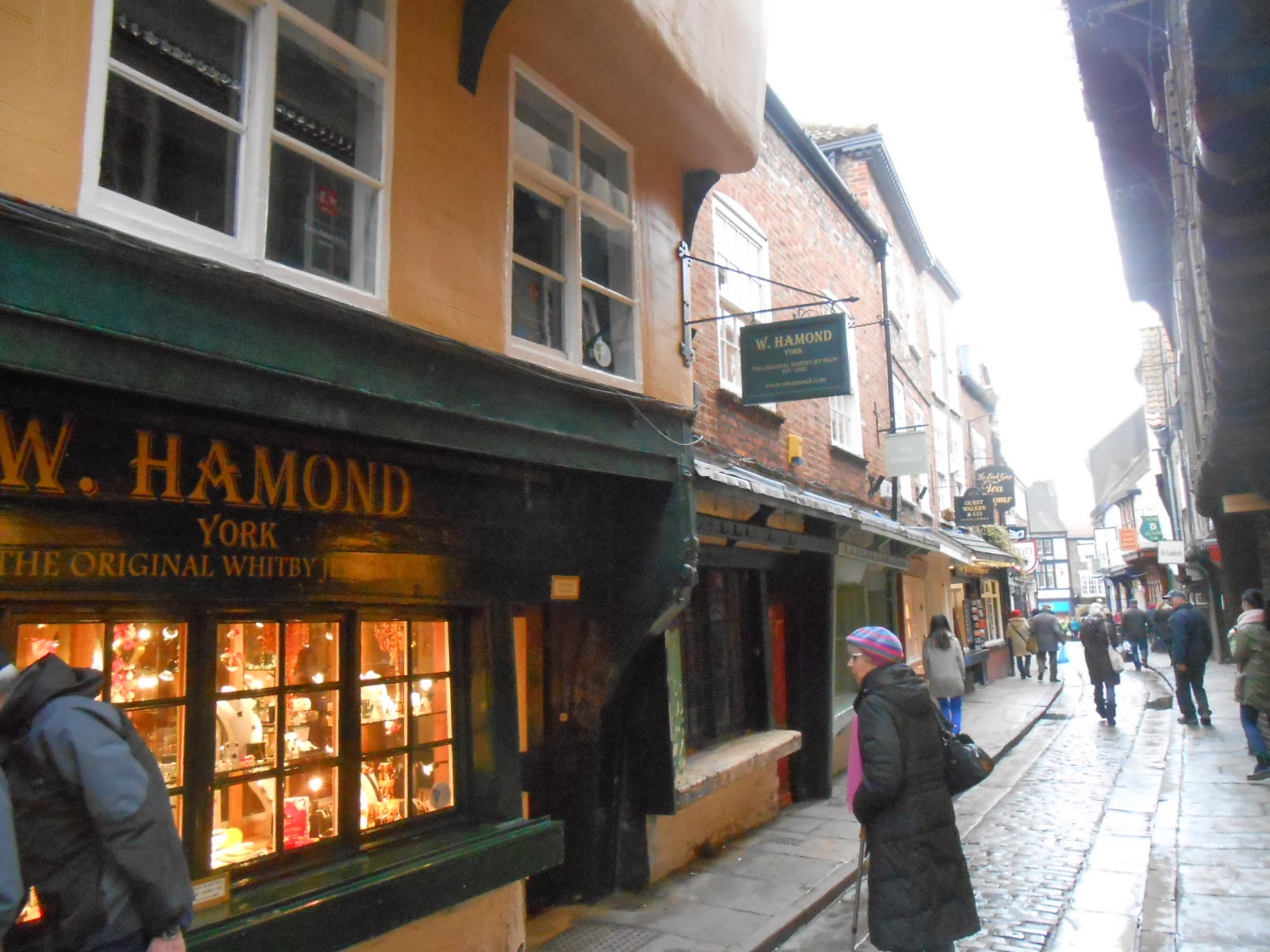 W. Hamond, The original Whitby Jet Shop, is one of my favourite shop. It was established in 1860, and in 1861 Queen Victoria wore Whitby Jet as mourning jewellery.
Well, if it's good enough for Queen Victoria, then it is good enough for us. We went inside and priced a lovely jet necklace. Unfortunately, the price of £1800 was a little over my budget, but just to handle the jet which is an ancient, organic gemstone, formed over millions of years from the compressed wood of the Araucaria (prehistoric Monkey Puzzle tree) was such a treat. 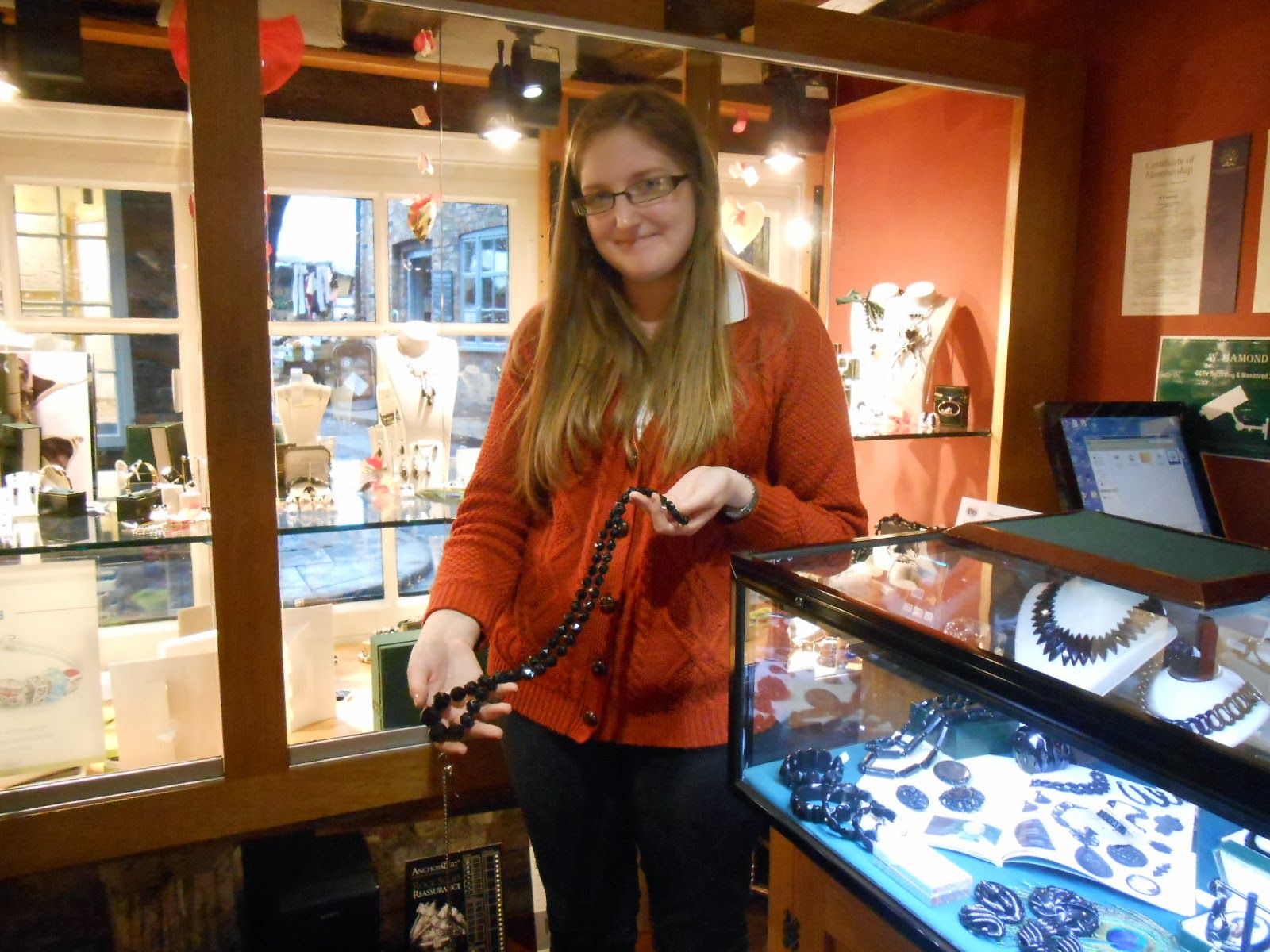 Thank you Jenny, for giving us an incite into what goes in to making jet jewellery. 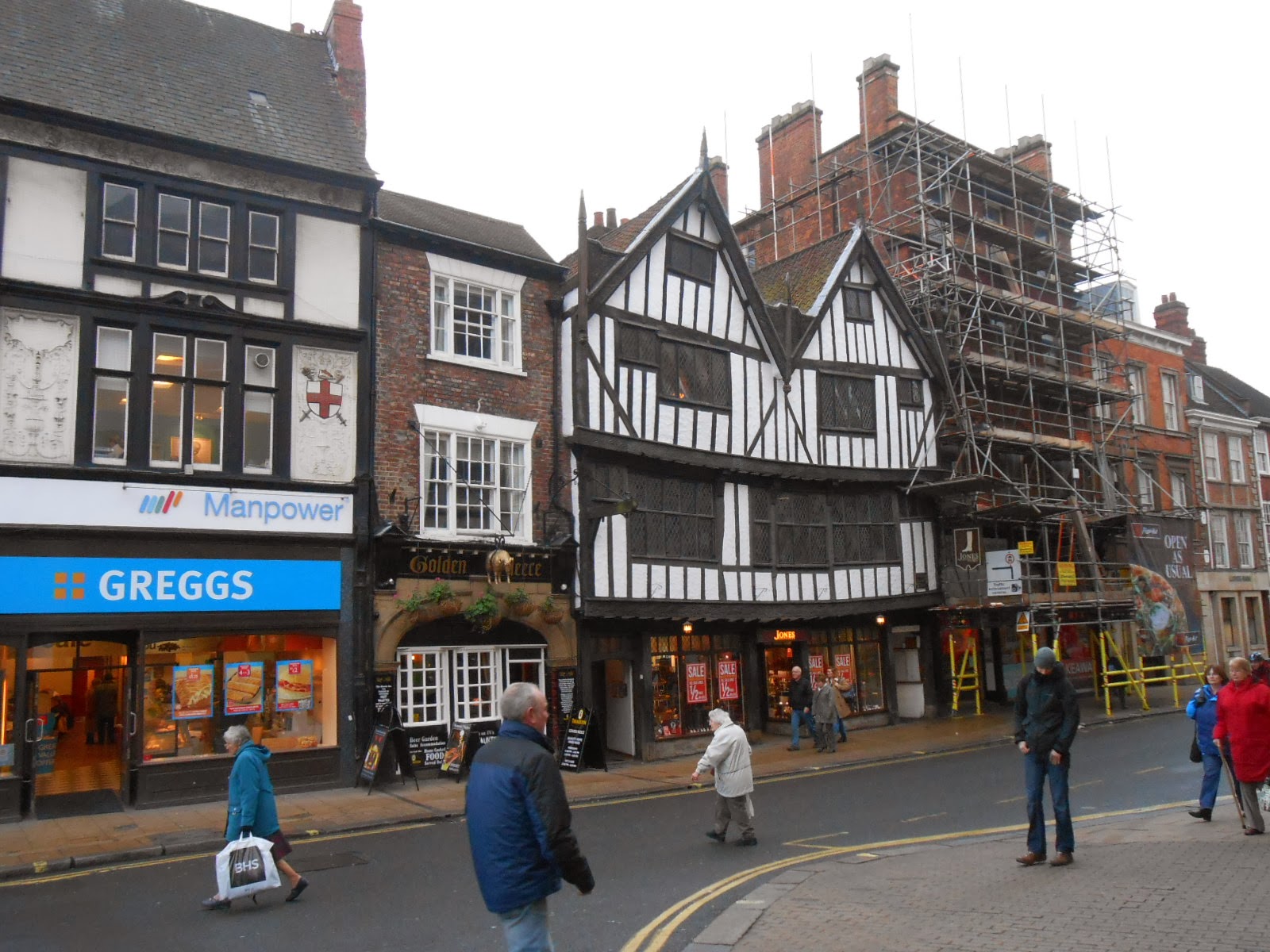 Of course, York has a Greggs cake shop, (where doesn't). 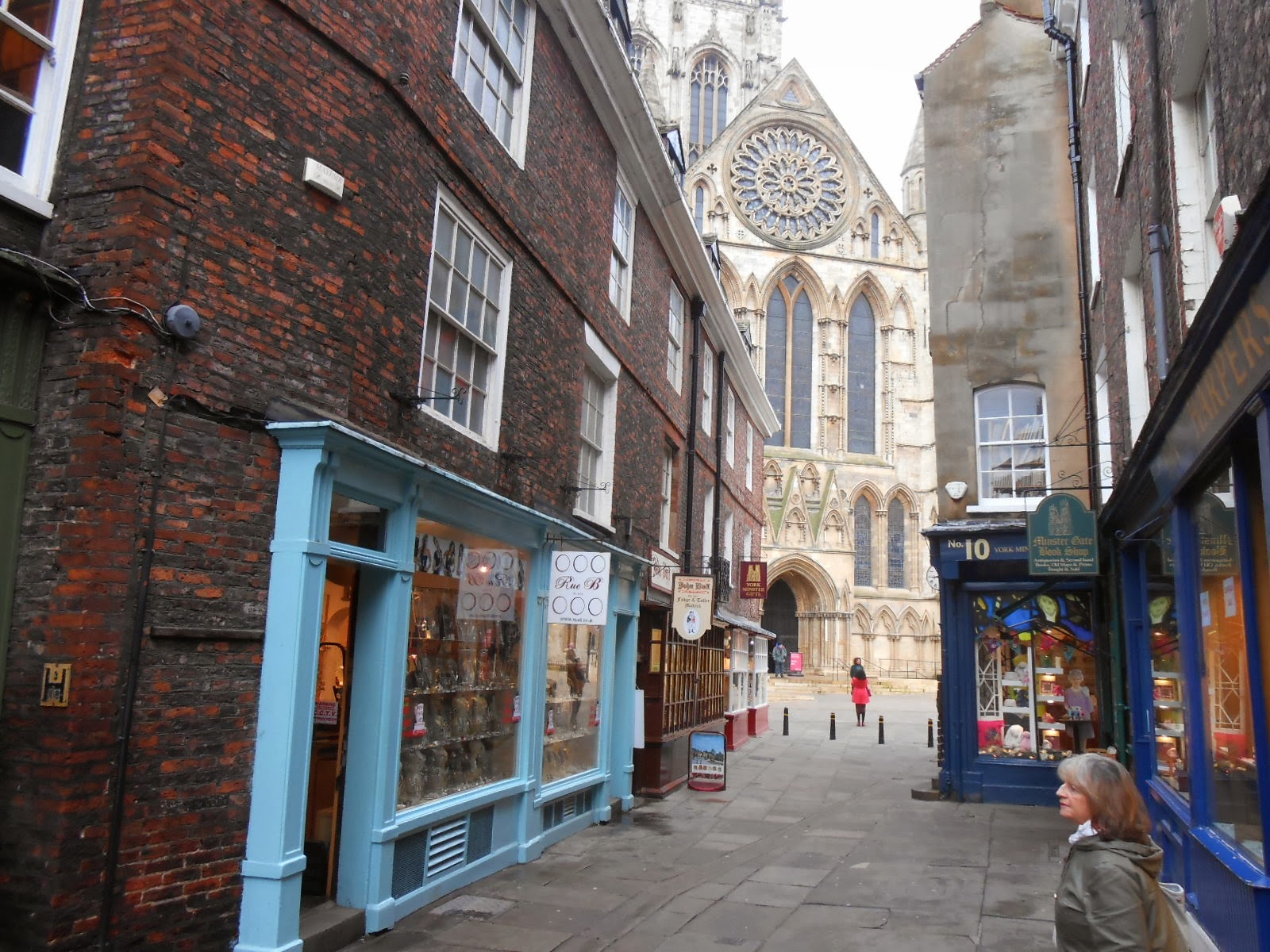 And then it was off to the Minster, where we had tickets to attend Evensong at 5.30 p.m. 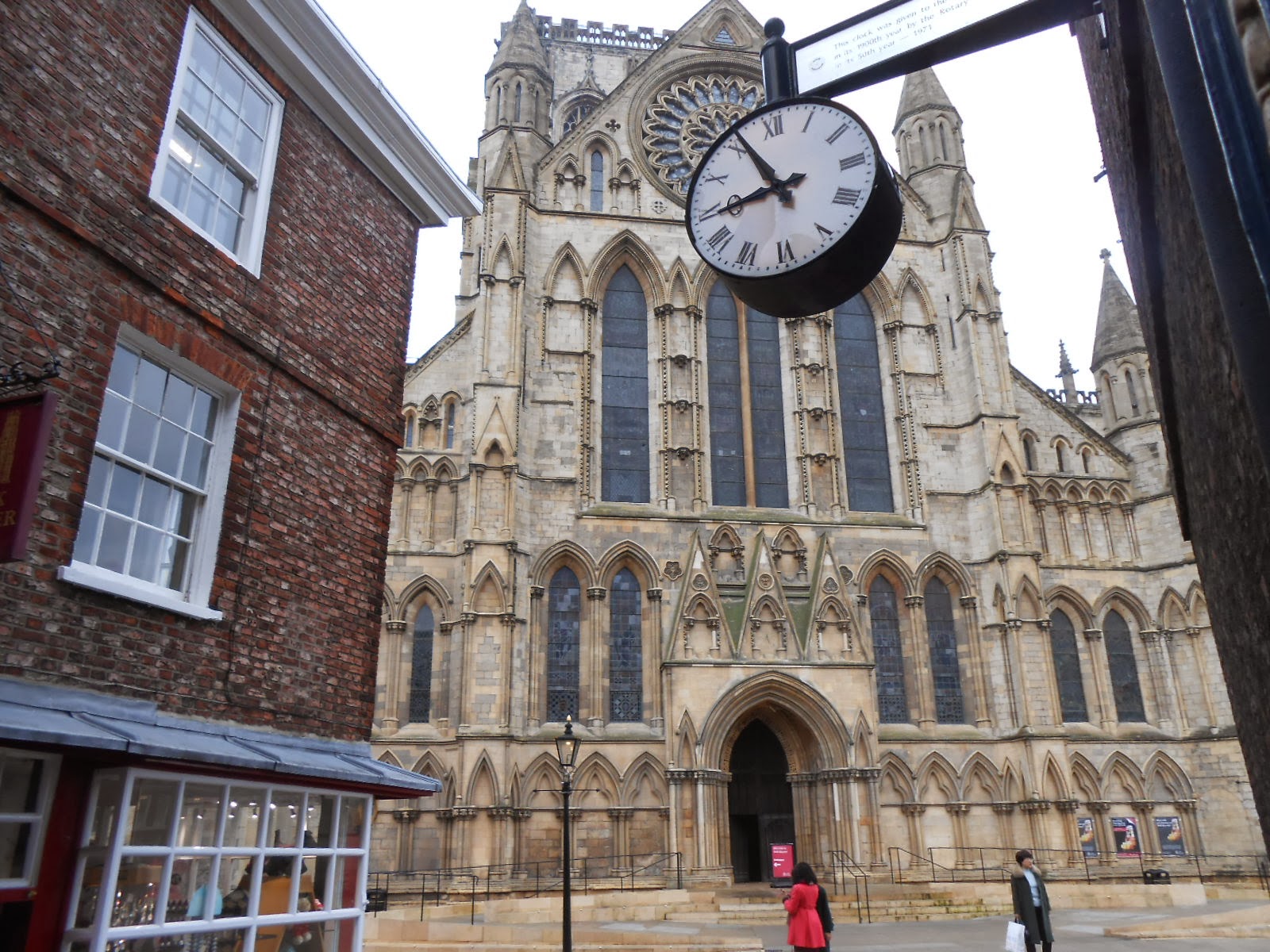 The time on this clock is obviously wrong as we were in good time, so that we could look around the Minster first. 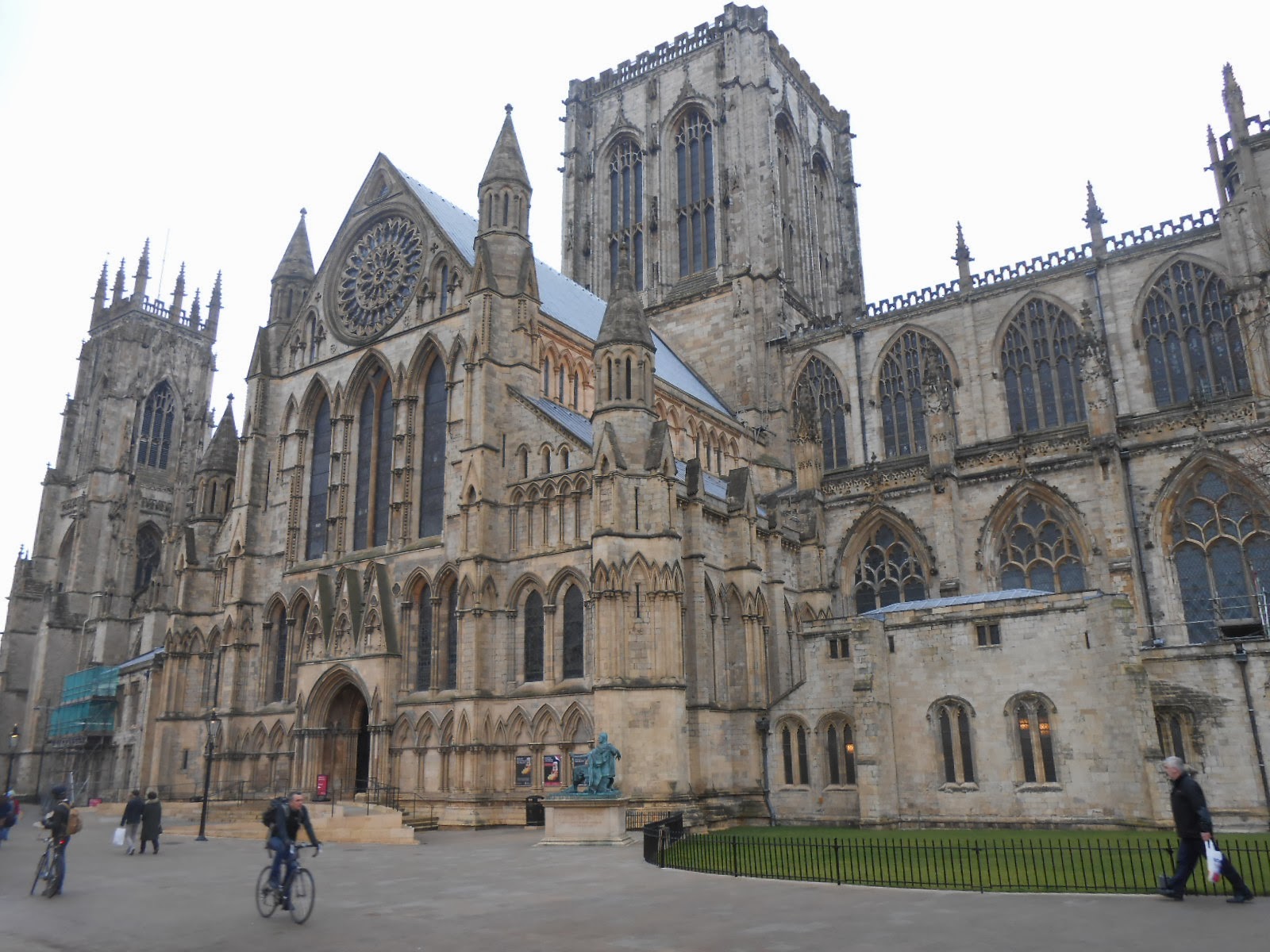 You have no idea how difficult this shot was to get. I am not very tall, and getting this much of the building in meant I had to find just the right spot to stand, and on tip toe at that. 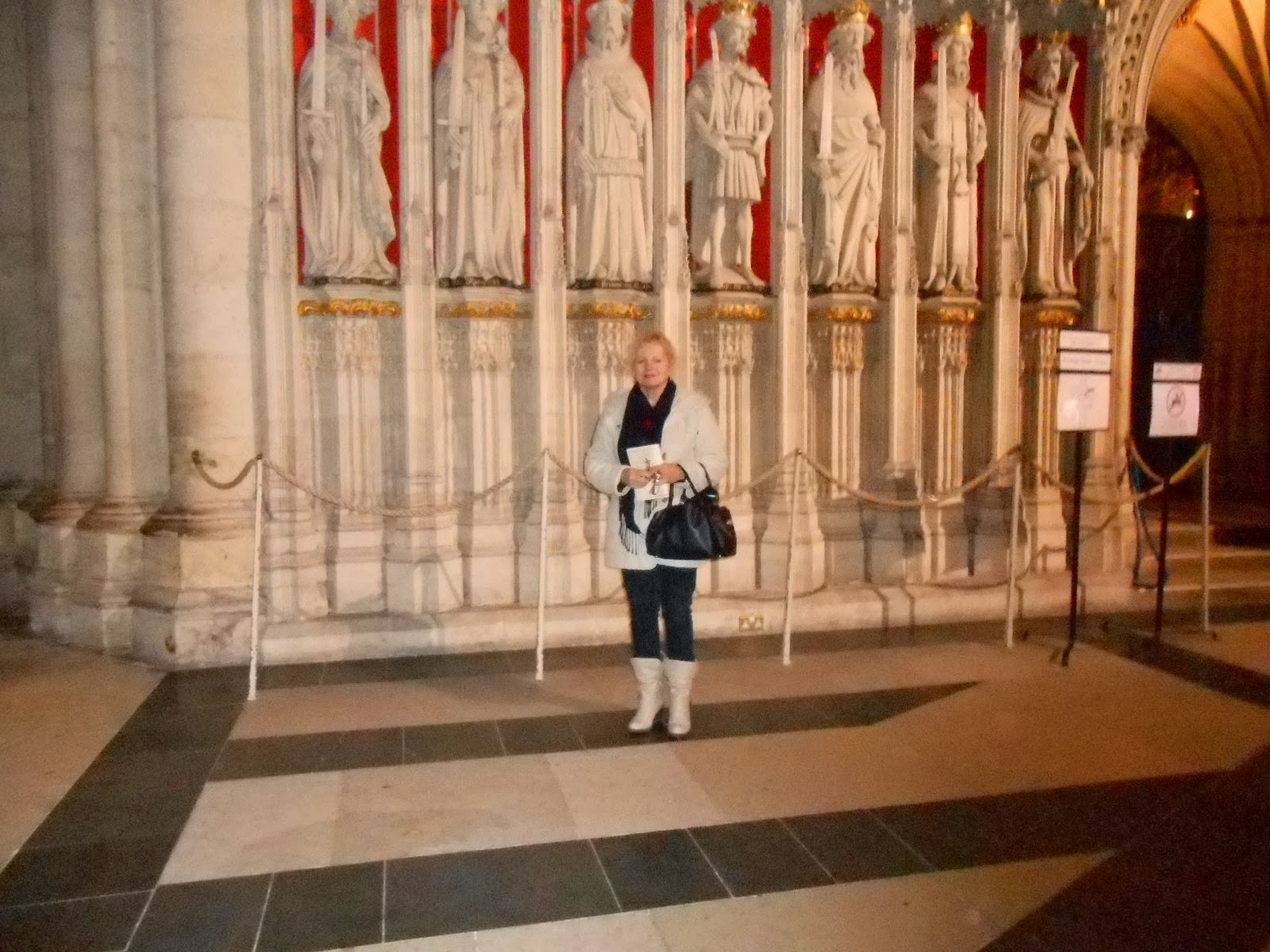 Once inside we just had time for a couple of photo's before the service began. Behind this wall of carved statues are the choir stalls and side pews. How fortunate we were to be there on the night that the choir was singing an anthem that was being recorded. 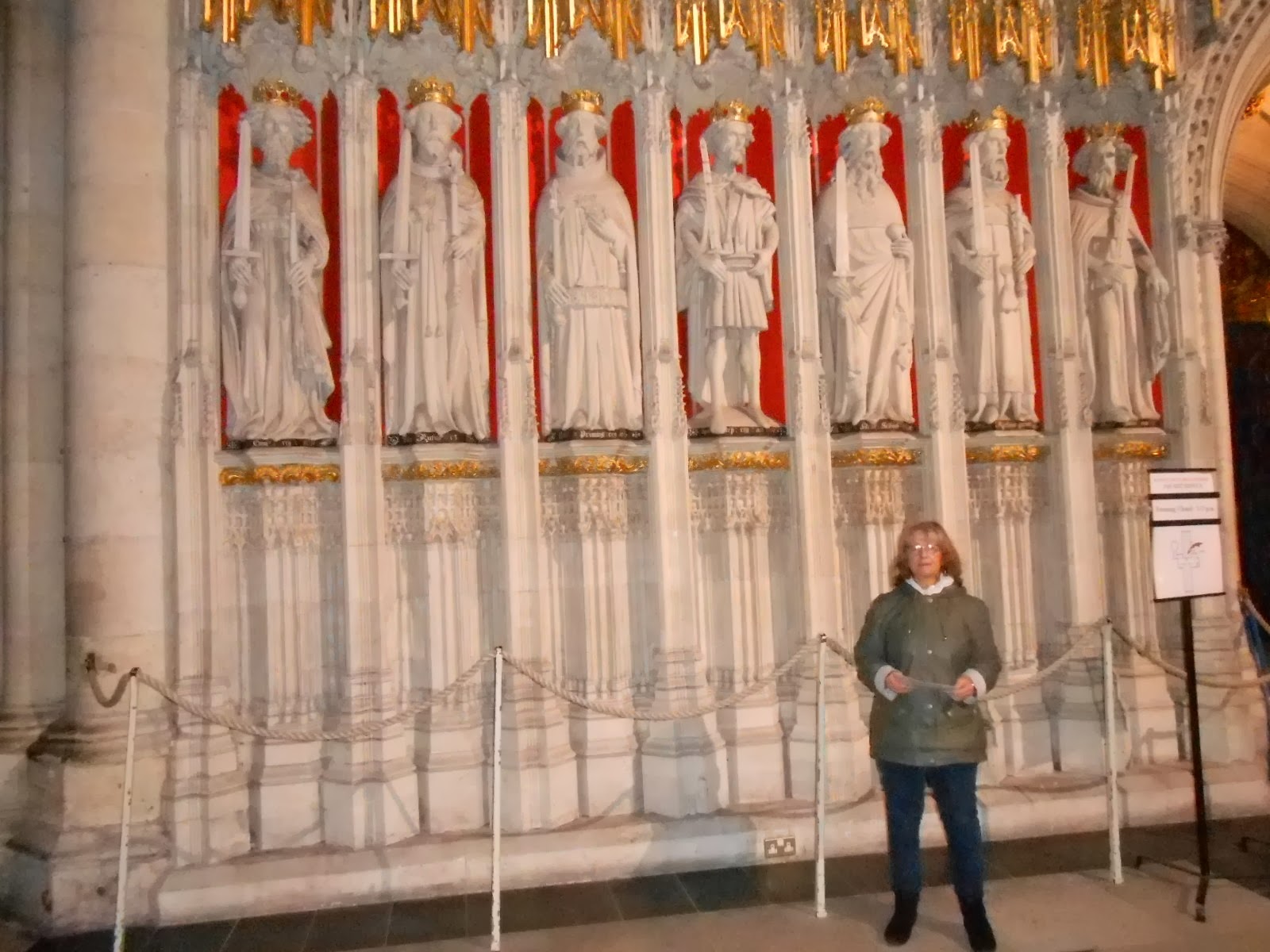 York Minster is a very special place, and we even managed to go down underneath the building to see actual foundations of a pre-existing Roman fort that was on the site before the church. 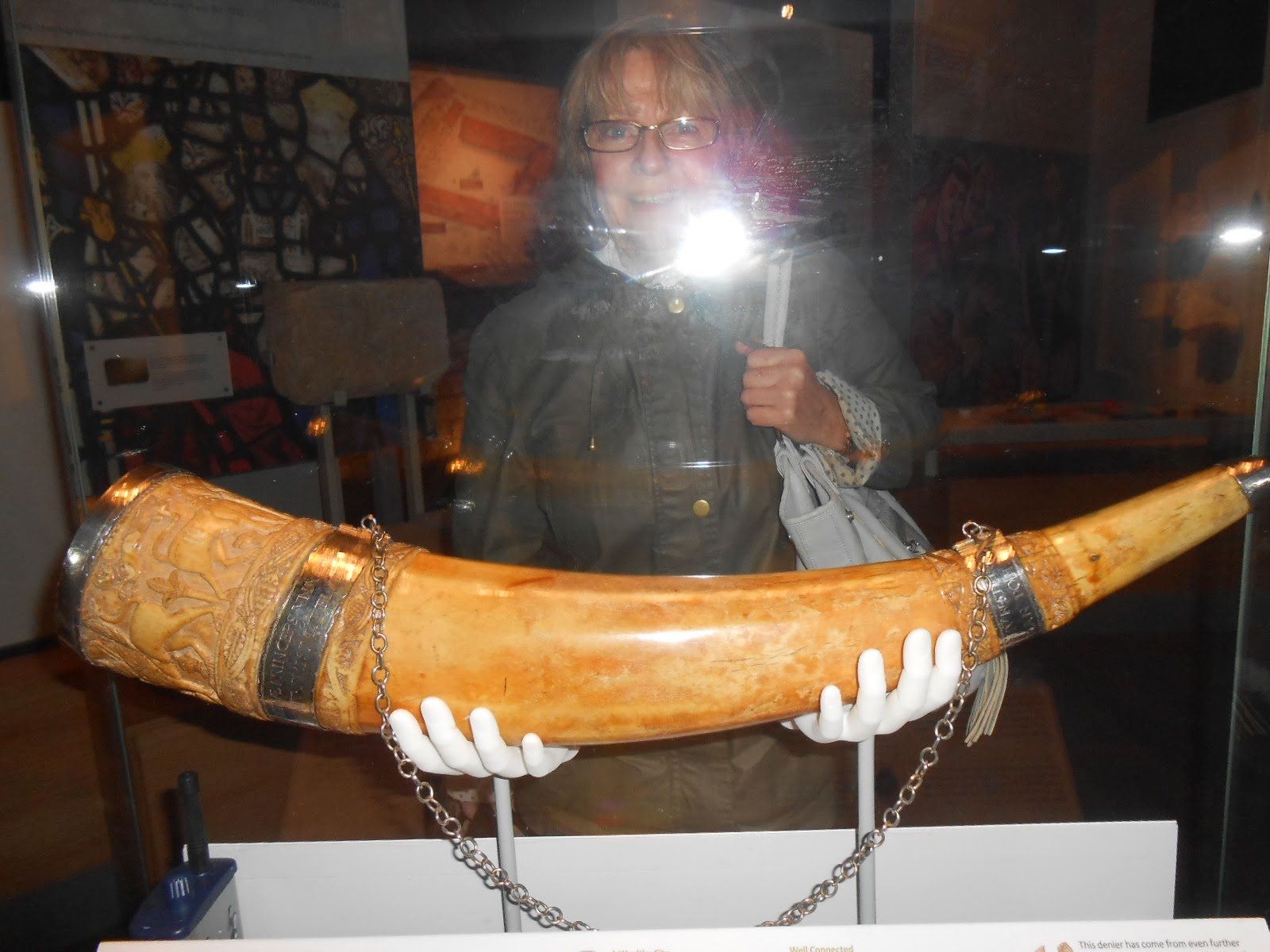 This is the horn of Ulf, a Viking land owner. It is quite magnificent don't you think. 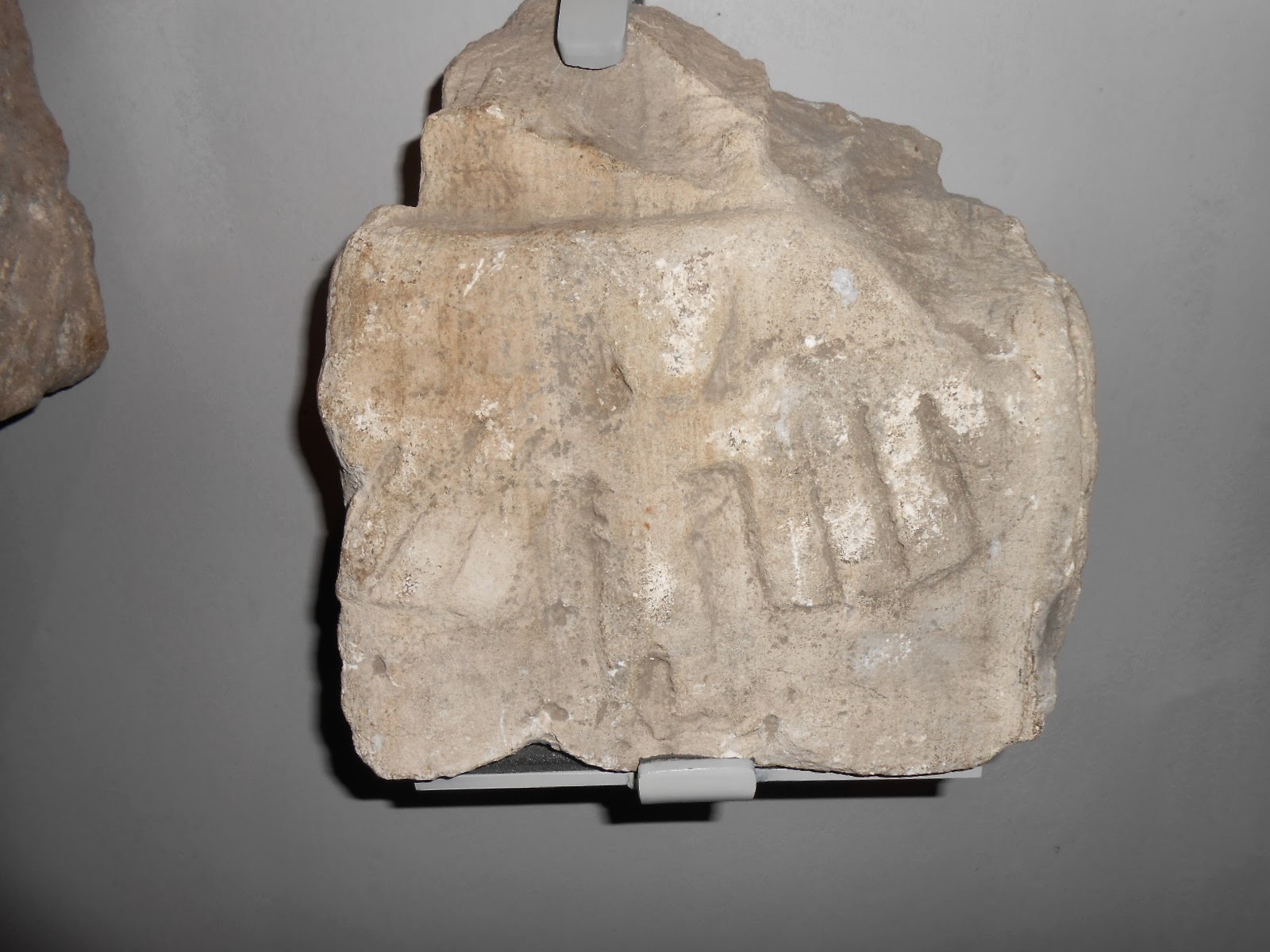 This ancient stone carving took my eye. Are they primitive wings? Is this an early depiction of an angel. 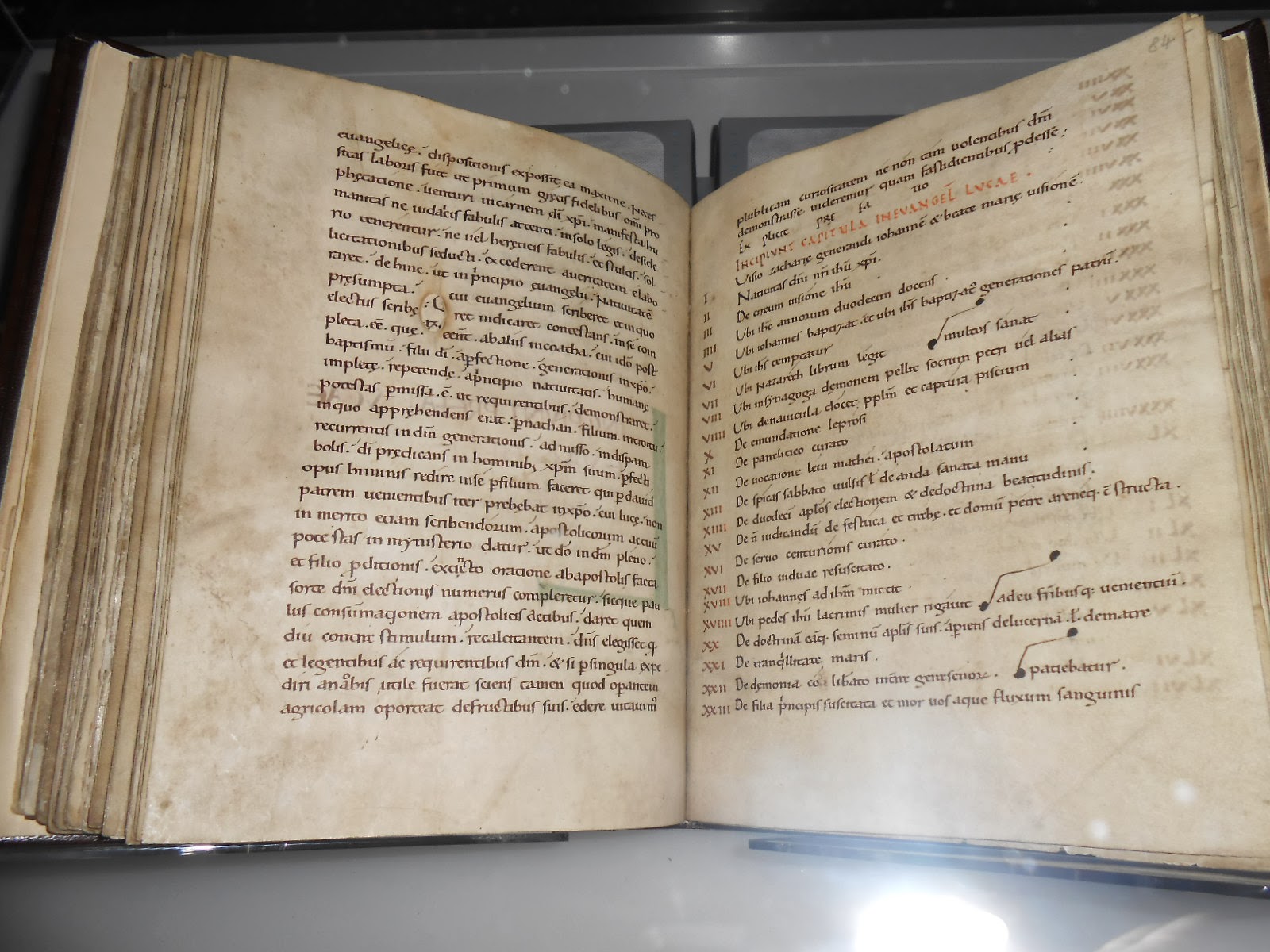 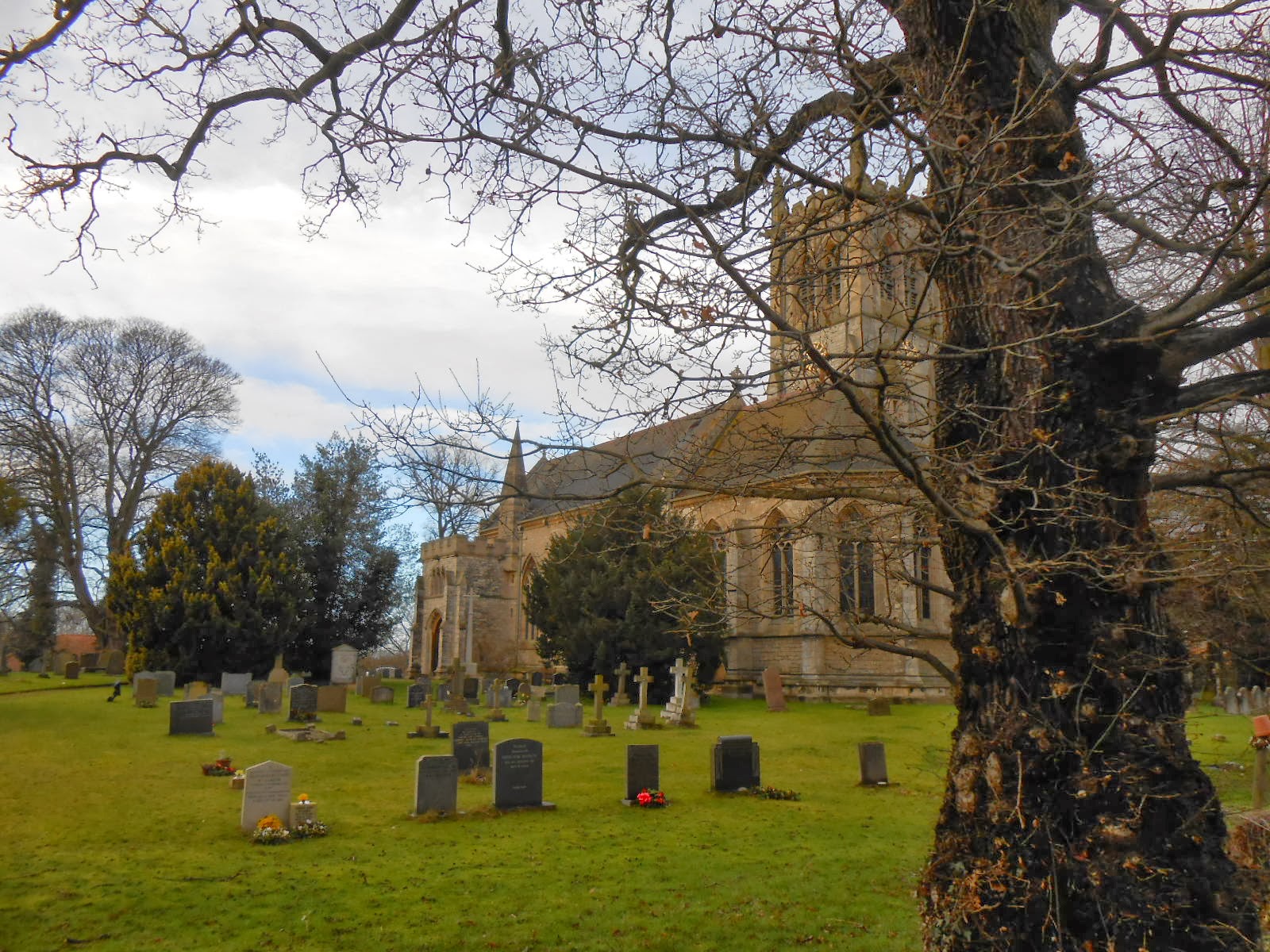 Before we left Escrick, I snapped these pictures of the village church. We didn't have time to investigate its interior. The bus stops outside the church. There is no bus stop, but about every 20 minutes a 145 comes along, and a wave of the hand is all that's needed. 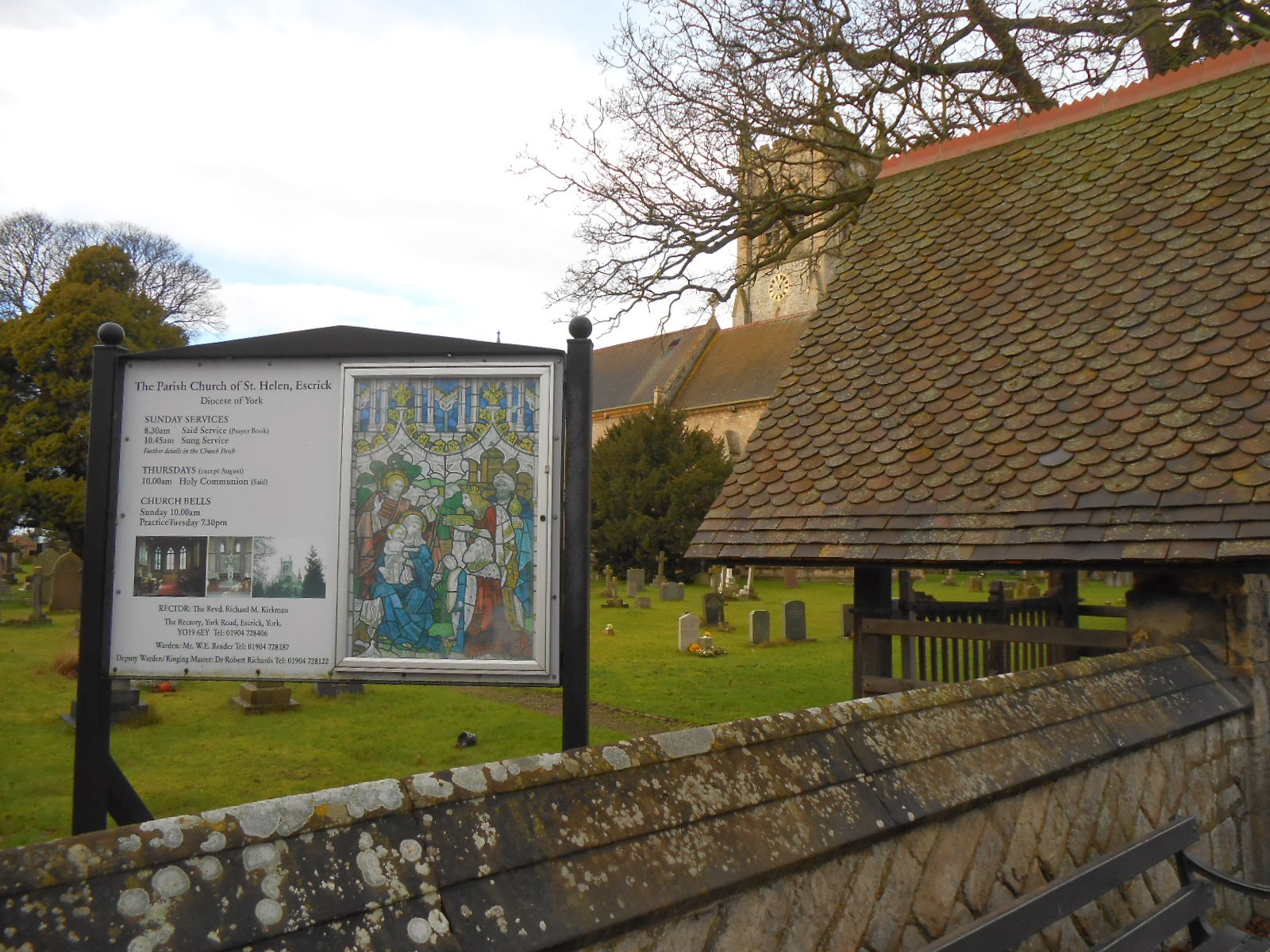 We left the Parsonage Hotel after eating a hearty breakfast, and just as a fill in before our trains left we got off the bus at a shopping mall about half way between Escrick and York. It wasn't too exciting, but we managed to buy a pair of shoes each in the sales.

So, our little break was almost over and we arrived at the station in good time to sit and have a hot spicy apple drink before saying goodbye.

It was a very agreeable little sojourn. I have returned refreshed, and with very happy feet.


I do hope you have kicked off 2014 with jolly vibes. You know what they say, 'It's not the destination, but the journey, that counts.' My next journey is coming hot on the heals of the last one. Tomorrow I am off to the theatre in London to a matinée performance. But I'll tell you all about that adventure later.

P.S. And if you would like to read about another of my adventures, then you might like to take a look at my book, Tears from the Sun - A Cretan Journey. It is available from Amazon, in paperback or Kindle version.