David and I popped into the little Antique Fair today, which is held at the Public Hall in Beckenham. We were a little late, and the stall holders were packing up their pots and plates as we walked in. Undeterred, we had a quick look around at what was still on display, and got into conversation with a very nice lady who was selling antique jewelery. We explained that we were new to the area, but the lady told us that she had been coming to the Antique Fair in Beckenham for 40 years. She went on to tell us some of the history of the Public Hall, and, if it hadn't been near to closing time, I dare say we could have gone on talking for much longer. "There are lots of famous people who have come from Beckenham, you know," she went on to say.

So, when I got home I did a bit of investigation, and sure enough there are lots of famous people from Beckenham. I found this information on the Welcome to Beckenham website. Do you remember Noddy and Big Ears? I do! 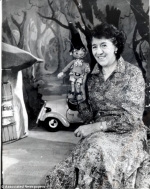