Adventures on the Norfolk Broads

A FAMILY HOLIDAY ON THE NORFOLK BROADS

Joanne and Jack picked me and David up at about 9.30 a.m. in their little, navy blue Fiesta. The poor car was already laden down with a couple of small ruck sacks, 2 garden chairs, badminton rackets, 24 cans of cider, 2 bottles of wine, water, and big bag of groceries, from cereals to sausages (in fact, fine Beckenham sausages from Villagers Fine Sausage Shop). By the time our bags had been squashed into the remaining space, and we were in the car, its springs were feeling the strain. Loaded up as it was, we set of gingerly, down the road.

Feeling the swing on each corner, Jo soon got used to the extra weight, and in no time we were heading out of London towards the Blackwall  Tunnel. And that is when we hit a queue that stretched into the distance like a giant, colored bracelet going round the earth. With a sharp turn to the left, we swung onto a side road. "No, it is too early to join queues," Jo stated, and we were on our way to the Rotherhide Tunnel. It seemed like other people had had the same idea because the road was very congested. But the traffic did keep moving, and after about an hour, we were reading the sign over the tunnel, 'Built in 1908' and being gobbled up into the mouth of its Edwardian facade.

I, for one, was thankful to get out of that tunnel. We had to proceed very slowly behind a mini bus that crawled at an unusually slow pace, as though the driver was drunk, or on his mobile phone. He even mounted the safety curb at one point, making us hang back a little. There was a build up of fumes in the tunnel, too, diesel and petrol exhaust, it wasn't pleasant. Ah well, we survived! Next we made for the motorway, headed for Cambridge, and then on towards Norwich. Our destination was a little village called Ackle, in Norfolk.

Safely arriving at Ackle, we located Richardson's boatyard and found the boat that we had hired for four days, moored, and waiting to be loaded with our bags and baggage. Very soon, Bill the boatman was explaining the ins and outs of how to handle the boat, and explaining river regulations.

We set off, David at the helm, for a practice run, and once it was clear that we had mastered the art of knots for mooring the boat, and proved we could handle her on the river, Bill the boatman hopped off, and we were on our way. I think the pictures tell the rest of the story. 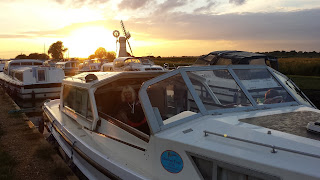 And so the sun set on our first day on the river Bure. 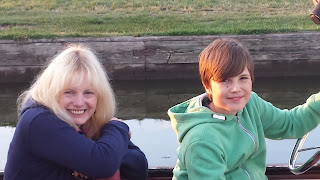 This is my favorite photo of me with our grandson, Jack. 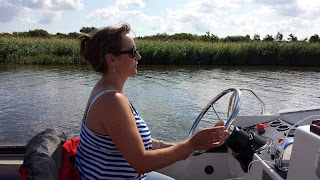 We all had a turn at steering the boat. 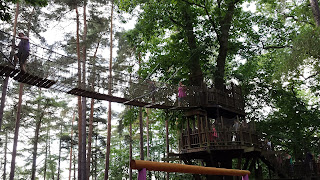 But only Jo and Jack braved this tree top walkway when we went to BeWILDerwood for the day... 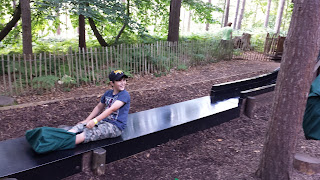 And Nanny and Granddad watched while they came down the slippery slide. 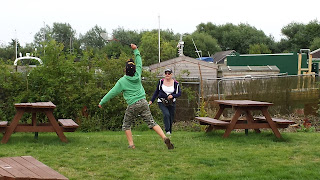 I did enjoy a game of badminton with Jack, on the lawn at the pub, where we moored for the night. 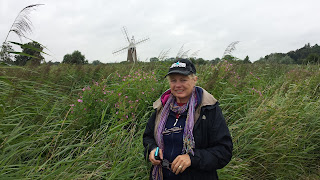 Even though we had a bit of drizzle on day four, it didn't stop us exploring the nature trails of the area. 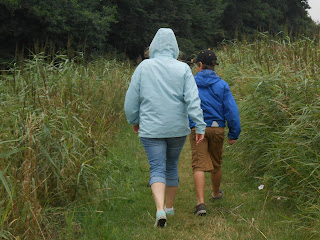 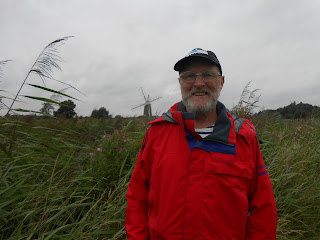 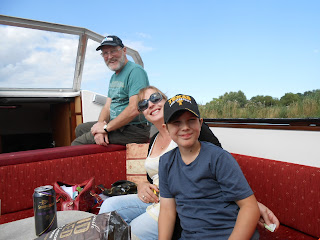 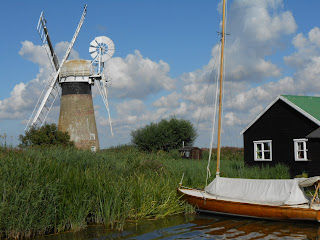 We passed several windmills, mainly used for drainage. And the ruins of St Benet's Abbey, which was once patronized by King Canute. 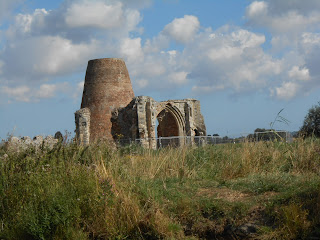 This is all that is left of the gatehouse of St Benet's. The windmill, now also a ruin, was built here because of the sound footing that was available. I bought a book on the history of the abbey, apparently it was the only abbey not to be dissolved in the time of Henry VIII. But by 1545 it was no longer sustainable, and fell into ruin. Most of the stone has been carted away and used elsewhere, but a big cross has been erected in recent years, and the Bishop of Norwich, holds a ceremony there every year on the first Sunday in August. 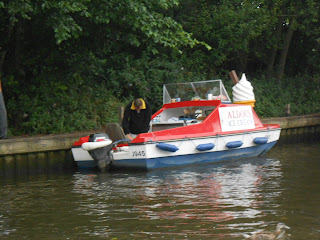 What river would be complete without its floating ice-cream man? 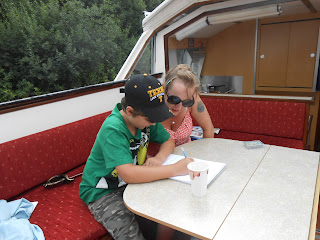 Jo and Jack played word games, while I talked to the swans. 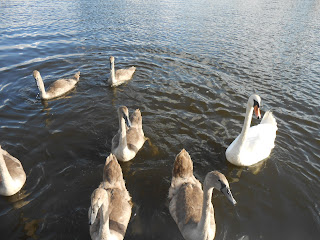 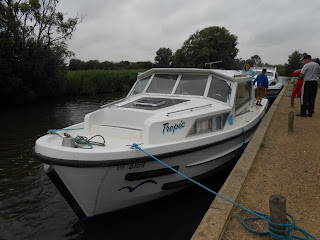 And then it was back to the boatyard, and the end of a wonderful four day break on the Norfolk Broads.

I hope you have enjoyed sharing the joy of our little adventure in Norfolk. Don't forget to click on the highlighted words, for more information, especially for info about the fantastic sausage shop in Beckenham. Please join me for my next adventure, which I'm sure will happen very soon.