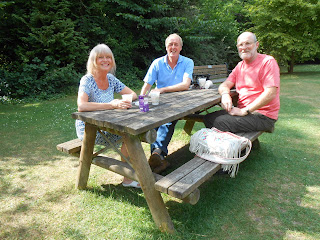 Don't you just love picnic tables in the park? This is the small park at Boulters Lock, right at the side of the river Thames. 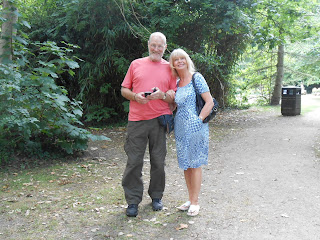 We had such a lovely time, wandering along the leafy pathways, and admiring the sculptures dotted around the park.

And as we walked, Yvonne told us the story of her experience with 'killer squirrels.' One day, one such beast had shot up the trouser leg of her unsuspecting grandson, causing pandemonium, as they took a leisurely stroll in the spring air. Well, that put us on killer squirrel alert, but, even though you could see the blood lust in their eyes, they kept well away from us. 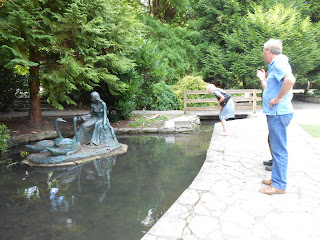 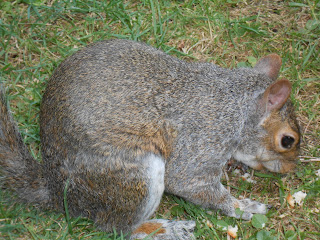 They may look cute and cuddly but marauding killer squirrels are devastating Britain’s wild bird population.
The grey squirrel has wiped out thousands of songbirds and ranks alongside the domestic and feral cat as the top killer of farmland birds.
The species was introduced here from North America in the 19th century and has no natural predators.
It is an expert climber and can reach the high branches of trees where birds like to build their nests.
The squirrel has an insatiable appetite and, if it comes across a chick or eggs, it gobbles them up.
Prof Roy Brown, of Birkbeck University of London, said yesterday: ‘In areas of high squirrel density, more than 93 per cent of small bird nests are being raided.
‘When this is combined with sparrowhawk activity, it can result in 100 per cent of breeding failure and a loss of 85 per cent of adult birds.’

So, you see, don't go around carrying chicks or eggs in your trouser pockets - you could be asking for trouble, especially if you are partial to a spot of picnicking in the park.
Keep smiling!
Love Jane x