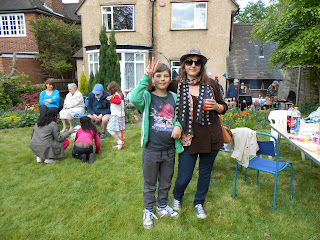 Gosh, it is almost a week since the Anniversary barbecue at the home of Reverend Parks. And what a chilly week it has been. But the sun was shining last Saturday, and, as you can see everyone was having fun. I resisted home made cake after my lovely barbecued sausage, but Jack had a most delicious looking piece of jam sponge.

On Monday evening I went along to the choir practice in Penge, where we worked quite hard to get our parts just right in readiness for the concert on the 8th June.

And since then I have not done anything too exciting. It has been a week of cello practice, poetry writing, and watching the Tudors, on TV. I also like to watch Time Team while I eat lunch about 1.30 p.m. and The Apprentice with Lord Sugar, that's good viewing. Apart from that the TV is usually switched off.

I will just mention the terrible incident that occurred in Woolwich this week. A British soldier was brutally murdered in the street by a couple of barbarians with hatchets. It has caused much anti-Muslim unrest, and I pray that people remain level headed and are not incited to further violence. I also pray for the soldier who lost his life, and his family and friends who are suffering right now.
I am trying not to give the incident any energy, so will not speak of it further.

Like I say, I have been writing verse this week. It is for a very special occasion which is to be celebrated on Saturday evening. Mary, my new friend, and fellow organist, is 80, and I am invited to her birthday party in Beckenham. I am really looking forward to it, and tomorrow Jo and I will go to Bromley to see if I can find something jolly to wear.

So, for now I'll say bye, bye, it is half past eight in the evening and I haven't had my tea. I feel a cup of soup coming on. Have a good evening everyone.